Big brown bats, just as the name would suggest, are slightly larger than the little brown bat, usually measuring in at 8-14cm in length, with a wingspan or just 30-35cm and a tail length of somewhere in the region of 3 to 5.5cm. Pop it on the scales and this small mammal would tip them at around 25 grams, but most of them fall somewhere between 10 and 20g. 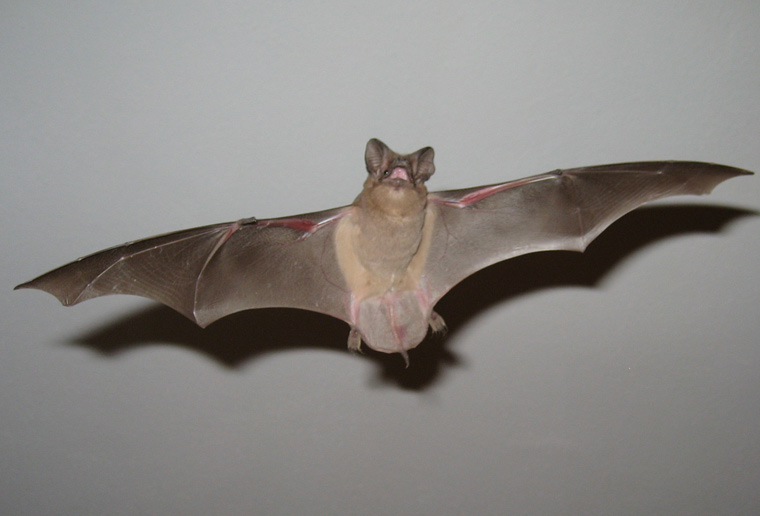 The name of the animal can be a little deceiving; it is usually a brown color, but can be darker and lighter tones too, including some light and dark grays.

Where does the big brown bat live?

The animal has a particular love for forests willed with deciduous trees, but has evolved and adapted over the years, moving closer to human settlements and even moving in right alongside them. In fact, these small mammals have thrived more and more with human interaction and don’t seem to mind it that much.

The big brown bat will hibernate throughout the winter, rather than migrating, and it will set up hibernation roosts in a vast number of structures, both natural and manmade. This means that old caves and tree hollows are likely to be forgotten about in favor for a home attic. The latter offers much more in the form of heat, food, and protection, this giving the animals a really great chance of having a successful winter (and then birthing season).

It won’t just be in residential attics that these creatures will set up a home during the winter — commercial buildings are hit just as hard, alongside some mining areas, rock crevices, churches, outbuildings and barns, storm sewers, and plenty of other spots. If it is warm, dry, and dark, the big brown bat can snuggle up together there as a colony quite happily. It is thought that this hibernation period in warmer buildings actually helps the bat to overcome a common, yet deadly disease that can affect many bat species across the USA, mostly eastern — a fungal condition called white-nose syndrome. The fungus tends to do better in cooler climates, making bats that choose cooler locations (mines, caves, etc.) more susceptible.

What does the big brown bat eat?

This is actually what makes the big brown bat so handy for humans to have around (although, not too close and not in large numbers) … a colony of bats will devour various insect pests, including beetles. They are essentially a natural pest control system, munching through bugs that would otherwise destroy your beautiful gardens.

Alongside beetles, the big brown bat will also eat other flying insects — moths, flying ants, flies, etc. They are particularly good at eating hard bugs, including hard-shelled beetles, with strong, albeit tiny teeth and very powerful jaws which clamp down with relative ease.

The big brown bat finds food in a vast number of places and locations, perhaps giving you a reason why populations of this breed flourish. Leaving the safety of their roost at sunset or just after, they don't just rely on water and water-borne insects to feed, making the most of insect populations over dry land too. They’ll also hunt in both wild, rural regions, and busy, residential or commercial ones.

When does the big brown bat have babies?

Just like other bat species, males and females will come together to mate, but without fertilization happening right away. The female will hang on to her package from the male, fertilizing her eggs later on, usually when spring hits. Mating, on the other hand, can happen from the end of summer the year before, right through until the beginning of winter. It all depends on the weather. A later, warmer patch will encourage the species to stay out a little later in the year than it usually would, also breeding for longer too.

Female big brown bats are pregnant for a little under two months in total, and in the late spring and early summer, baby bats will be born in their droves, usually one or two little ones per litter.

Her kids will be entirely reliant on mum for at least five or six weeks, sometimes longer, before finally learning how to fly off into the night all by themselves. It doesn’t take long for them to be so large that you can’t make out young from adults — three months or so, and within the first year, a few of those females will be ready to start mating. It is considered that the young bats are sexually mature by the time fall/winter comes, but very few females will be successful at breeding that early on.