The evening bat is also known as Nycticeius humeralis, “common bats”, or “vesper bats”. Vesper means evening in Latin, and the actual Latin word for bat is vespertilio. They are a nocturnal animal after all. 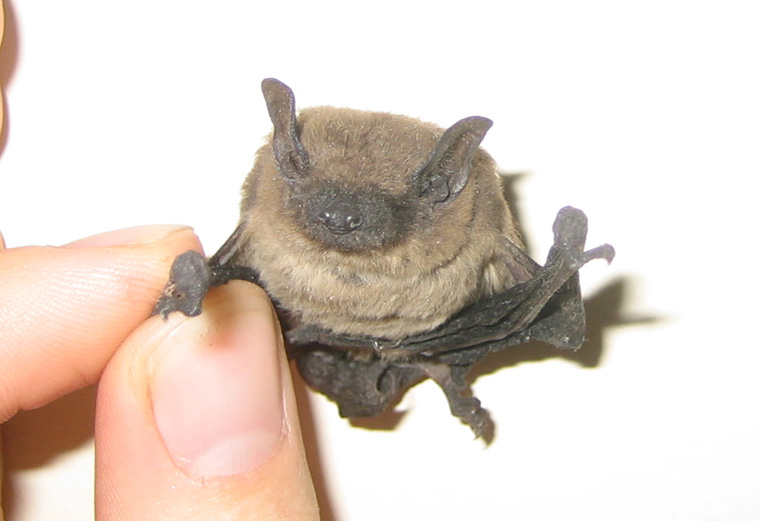 A common bat found across many places in the USA, evening bats are actually pretty small — they'd look tiny if you were to have one in your hand. On the scales, they'd only max out at 15-16 grams, most of them between 7 and 13 grams.

The evening bat is mostly gray, but can also have patches of both light and dark brown, and it would seem that some of them may even have lighter hues than that too — almost white patches of fur; although, this is rare.

If you weren't an expert bat-watcher, you'd be forgiven for thinking the evening bat was a younger, smaller big brown bat. The two species do look very similar, although the big brown bat is definitely larger in size and statue. They are two different bat species, however. This one — the evening bat — only lives for a short period of time compared to other bats. Big and little brown bats can live for ten or twenty years in perfect conditions, but the evening bat generally only lives for a fraction of that — four years; perhaps five or six in absolutely perfect conditions. (Rare.)

Where does the evening bat live?

You will find the evening or common bat in more easterly or mid-western areas of North America, in states such as Illinois, Texas, eastern Nebraska, and even Northern parts of Mexico. Not bad for a bat that once considered to be a southern species, right?

This bat species likes wetlands, where there is an abundance of insects to devour. You are probably not going to find this bat in a cave, the animal preferring forests and trees instead. They like bark that has come loose and the hollows found in larger trees. This doesn't mean a residential or commercial property will be safe, however; they are a common nuisance species in some areas.

What does the evening bat eat?

Evening or common bats are a pretty steady, yet slow flightpath, making them perfect creatures to catch flies, beetles, moths, and leafhoppers mid-flight. Bodies of water will, obviously, provide a perfect source of flying insects, and this is where they'll hang out at dawn and dusk, or just after. Being nocturnal animals, they tend to be more active a couple of hours after sunset and a couple of hours before sunrise. This is when the insects are still out or are just coming out, and just one hundred bats in one evening bat colony can devour somewhere in the region of one to two million insects in just one summer period.

When does the evening bat have babies?

Just like the big and little brown bats, evening bats will mate earlier than necessary — fall and winter, storing sperm until they are ready to fertilize the eggs. This will happen much later on, once winter has passed, usually when the weather turns much nicer in spring.

When they are ready to have the youngsters — usually two, but up to three or just one baby can sometimes happen — the females will come together to form maternity roosts, and these can see bats flock together in their hundreds; sometimes as many as a few hundred bats in one roost.