Instructions for Bats In Buildings

Need bat removal in your hometown? We service over 500 USA locations! Click here to hire us in your town and check prices - updated for year 2020.
STEP ONE: Arrive before dusk and listen to the resident, have them point out the bat areas, and look at the droppings on the ground and stuck to the walls. There'll also be brown grease at the entry point. It's usually easy to see where they get in and out. Inspect the attic and see if there's any droppings, and where they are, and how many there are.

STEP TWO: Watch the house at dusk. Even if you think you know all of the bat entry/exit holes, watch the house at dusk at least once. You'll often get a surprise: the number of bats may be different than you expect, but more importantly, they may be coming out of areas that you didn't suspect. I've learned that it's important to do this dusk watch.

STEP THREE: Once you know the situation, quote a price. Quote to seal, or "bat proof", the entire house. Inform the resident that if you don't, the bats will find a new part of the house, and that you only guarantee what you seal. Charge appropriately to bat proof the whole house - it's very detail oriented work. Also quote a price to remove all the bats via proper exclusion netting. You can make this price any amount you feel is fair, based on the location and difficulty of setup. Also quote a price to clean and decontaminate the droppings in the attic or soffits, and show the customer photographs you've taken in their attic of the bat waste. Site the dangers of mold growth, corrosion, & histoplasmosis. If it's a big mess to clean, and a long project, the price will be higher. Some colonies of bats are small, and the price will be lower.

STEP FOUR: Seal everything but the main bat hole(s). You've got to do this 100% perfectly. Don't leave any gap open, anywhere. Bats can get through amazingly small gaps. Seal everything with Pur-Black polyurethane sealant. You can schedule to do this sealing during the day, but I really prefer to do it at night for two main reasons: first, most of the bats will already be outside, meaning that if you accidentally seal an entry/exit hole, you won't seal many in. And second, you can see the gaps much better at night with a headlamp than during the day in the bright sun and shadows.

STEP FIVE: Drape netting over the bat holes. I prefer to do this an hour after dusk, because most of the bats are outside anyway, meaning that if you mess up in some way, it's not as big a deal. However, it's best if you do it absolutely properly, so that you never seal in a single bat. Here's the principle: you have to drape a net over the hole in such a manner than bats can flutter out of the hole and drop down and fall out of the open bottom of the net. However, it must block them from flying back in the hole. Bats are creatures of habit when it comes to returning to the entry hole, they need to land a certain precise way, and they can't hover. So when they try to fly back in, they'll fly directly at the hole - they don't know enough to fly under the open bottom of the net, and their flight ability probably won't let them anyway.

STEP SIX: Give it a day or two for all of the bats to get out, and then remove the net and seal the hole. If you're working far away from home, you can drape the net an hour after dark and then stay in that town overnight and remove it the next day and you should be close to, if not fully bat-free. If it's in your own town and driving concerns aren't an issue, let the net stay for 2-3 days just to be absolutely sure.

STEP SEVEN: If you've sold attic decon, do it after the bats are out, of course. You can take a small battery powered vacuum into the attic and vacuum up the droppings, and you can spray/fog the place with Bac-Azap in an atomizer, using the proper protective gear and filter mask.

Some people may consider trapping bats. Learn more about Is Bat Trapping Legal? 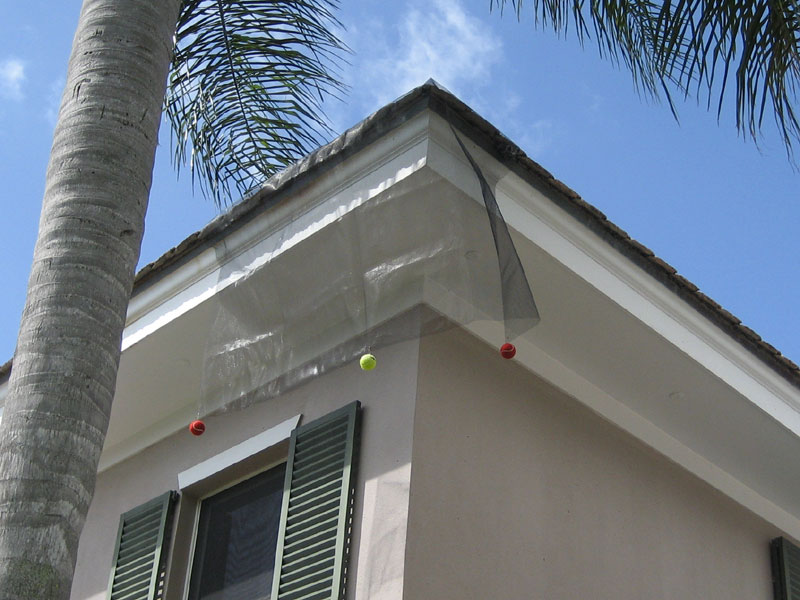 Here is a net draped over the edge of a roof - the bats were emerging from the edge. 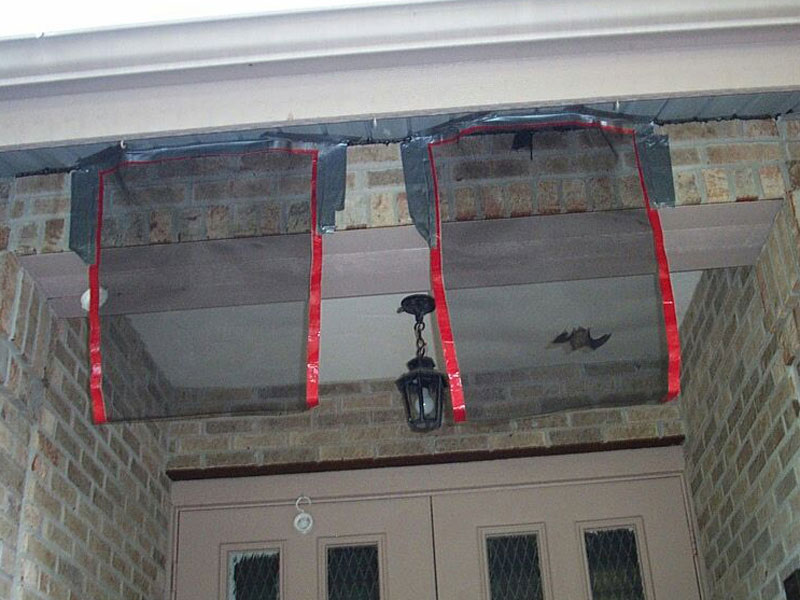 Bats were coming out of the gap between the soffit and brick. I didn't have to set two nets, one would've been enough. I often use duct tape to secure the sides of the net. A staple gun is good if you have a wood surface to work with. 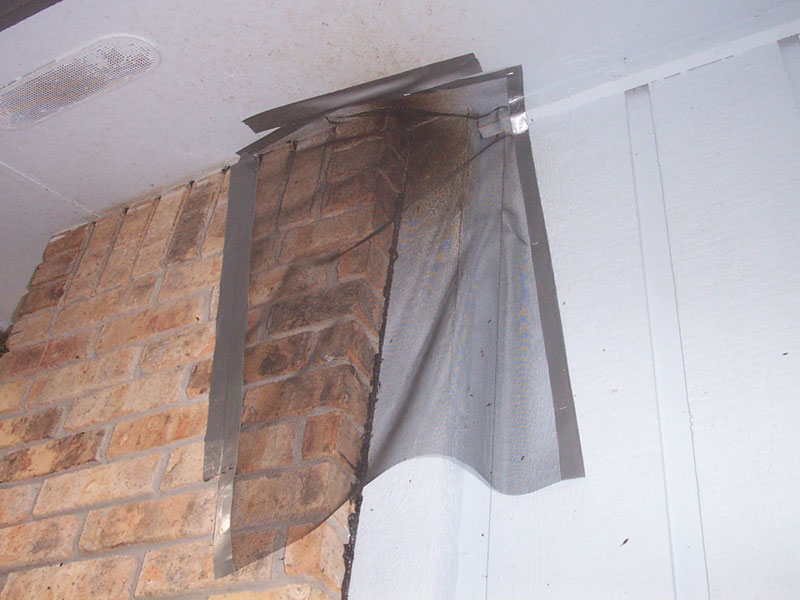 Bats were going in and out of a very small hole. Note the brown staining. I used window screen instead of polynet. Either is fine. 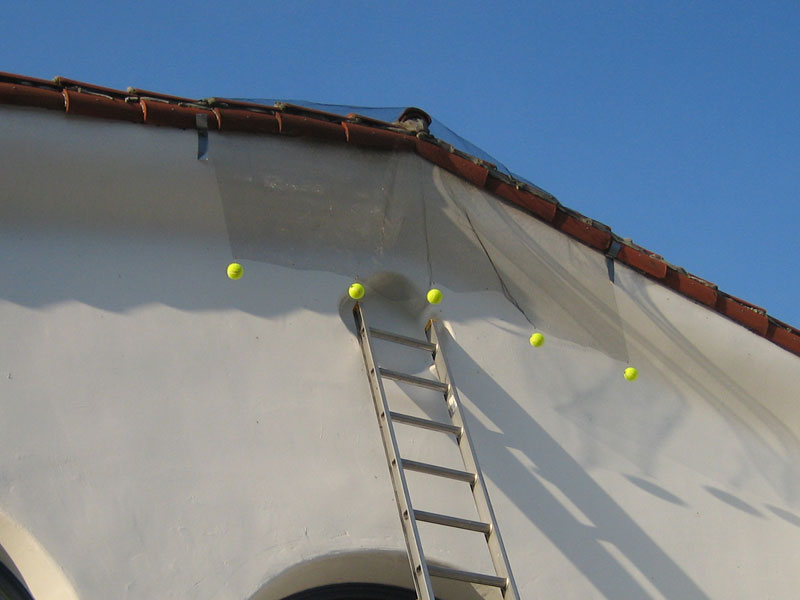 Here I've used 1/4 inch polynet. The tennis balls keep the net from blowing up and over in the wind. 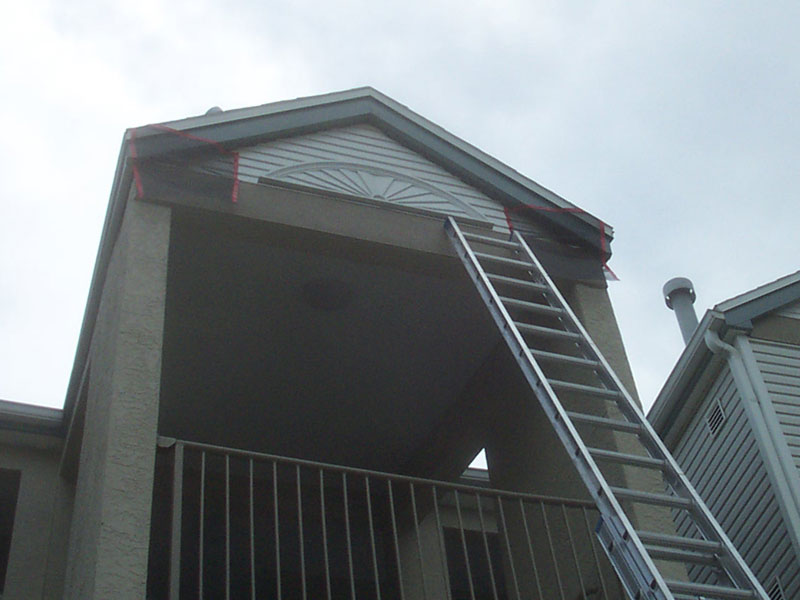 Bats were entering the entire gable, using the gap between the siding and the fascia. You can see my black sealant. They were primarilyt exiting at the ends, so that's where I hung the bat nets. 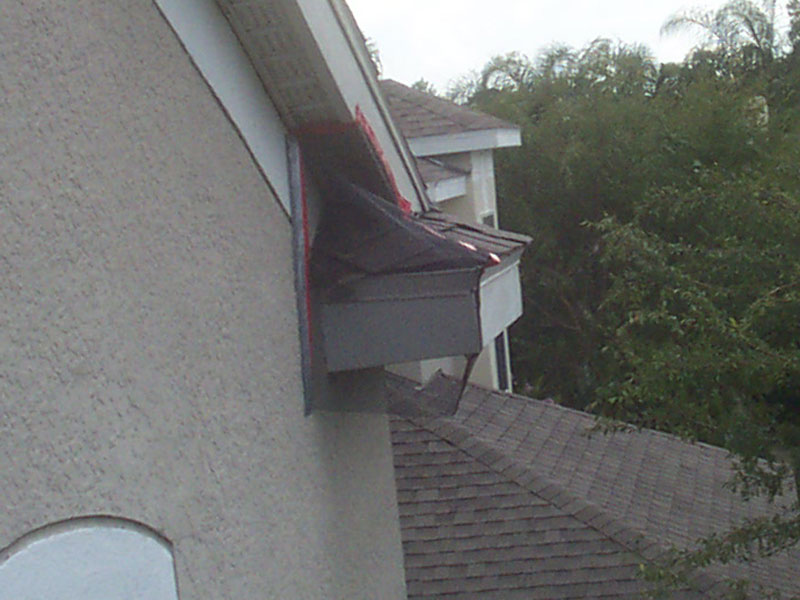 This is a very common bat hole, at the end of a gable. Sometimes architecture like this makes it tricky to hang a net properly. You can do it like this, or just drape a giant net over the whole area, or even seal everything but a little 2" hole, and put a bat funnel/cone on that little hole. 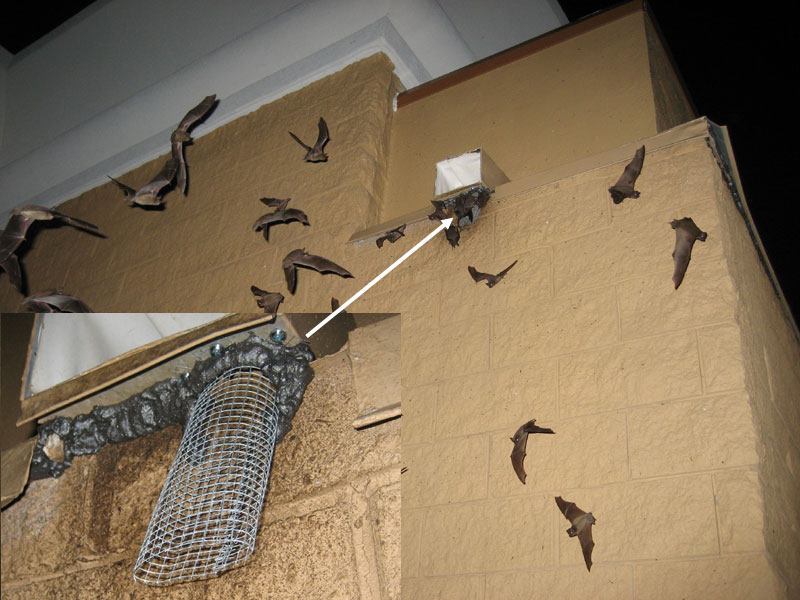 Here we see an example of a funnel. The bats were using a little hole. I could have draped a net over the hole, but it was 6 stories up, and I wanted something I could leave permanently. So I waited until an hour after dusk, and put a little cone on the hole. It worked perfectly. I watched many more bats come out, but none could get back in. In this photo, they're swarming to try to get back in. 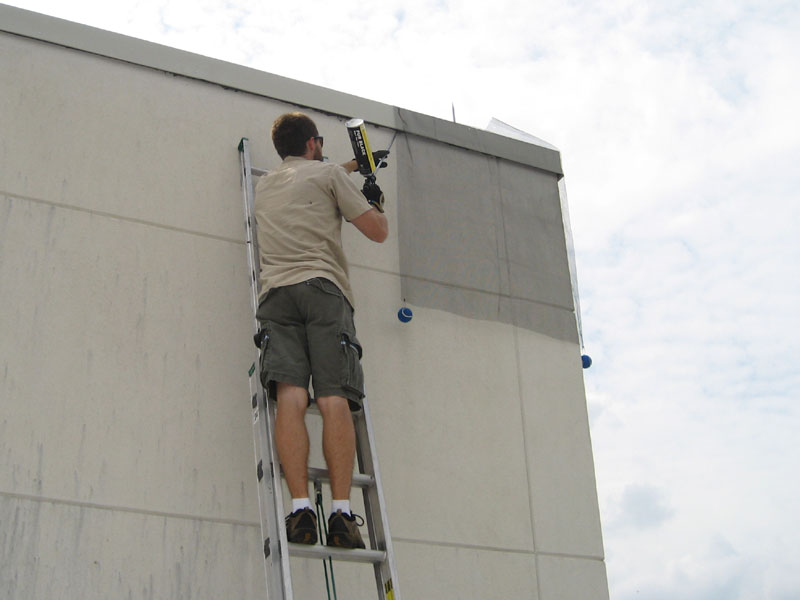 A simple type of job in which bats were entering a trim board (roof coping) gap. I'm using the Pur-Black foam gun to seal all non-netted areas. 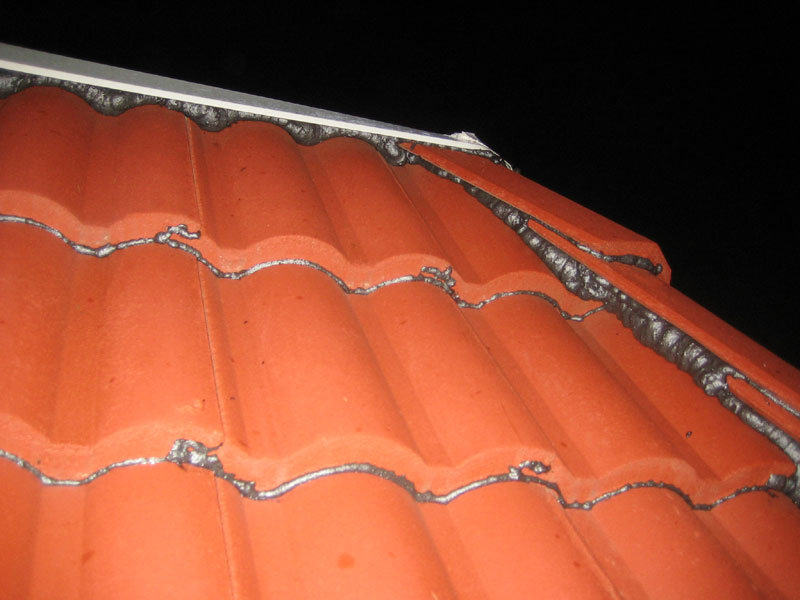 Here's a detail of sealing of roof tiles. Every last gap must be sealed - miss a spot, and the job is failed. 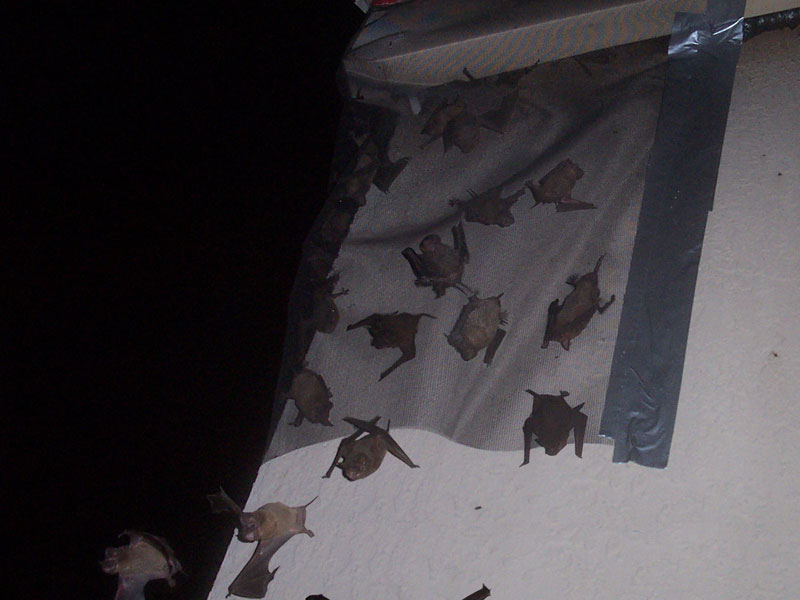 Here's bats coming out of a screen set by a fascia board gap. 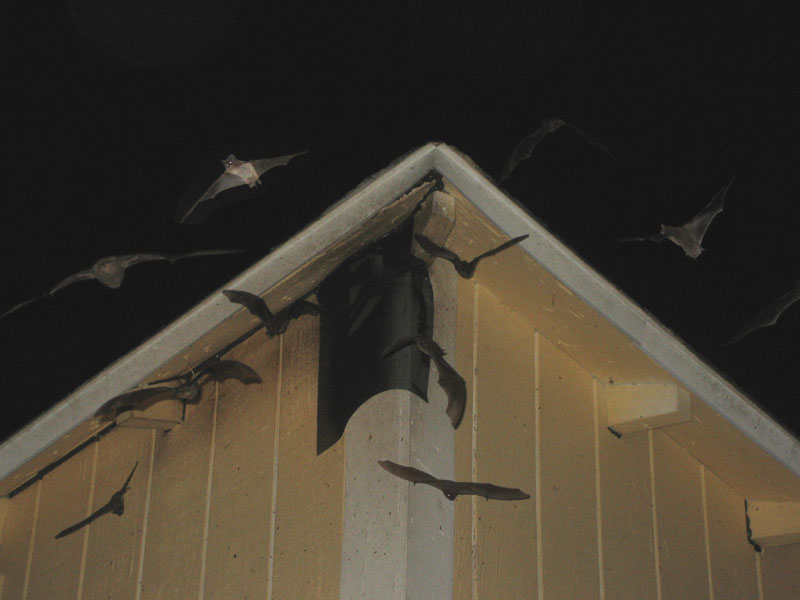 Here's bats trying to get back into the hole - another small screen stapled into the wood to block the hole where the siding meets the soffit. Note how the bottom of the net is curved and open to allow the bats to fly out. 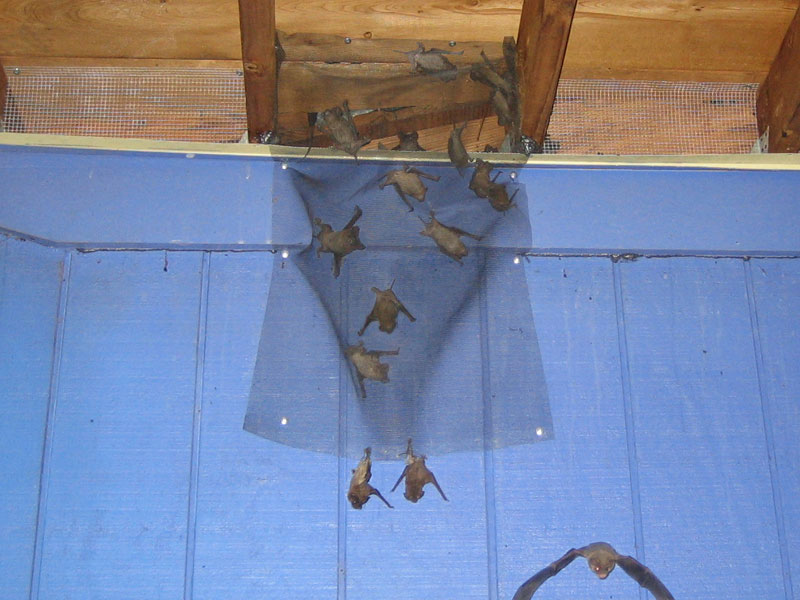 In this case, the bats had big exit areas. I blocked most of them off with steel screen (as seen on both sides of the net) and then set the net with an open bottom for them to crawl down and drop out of. Most of the time they just drop down and fly right out of the bottom, but sometimes they crawl out and then drop out of the very end. I probably should have left a bigger opening at the bottom.