Need deer removal in your hometown? We service over 500 USA locations! Click here to hire us in your town and check prices - updated for year 2021. 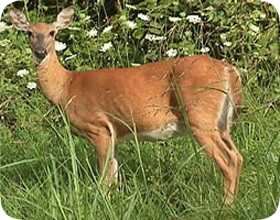 Deers are usually classified as a pest species because they eat desireable vegetation, including crops and landscaping. In many areas they have little fear of humans, and eat people's plants. The most common complaints include the following:

How to Get Rid of Deer - A few decades ago deer were not of any concern in many areas of the country. It was uncommon to see a deer, and nowadays they are so overpopulated it’s difficult to drive at night without hitting one. Part of the reason some areas of the country have seem exponential population growth for these animals is because of the lack of natural predation. The Northeast, for example, used to have mountain lions and wolves as far south as Pennsylvania. Because of the eradication of these two predators, deer have been able to multiply and thrive. A slight increase in the coyote population has impacted deer numbers slightly, but the effects are not enough to negate the steady growth of this timid species. For the most part, deer are quiet and shy, rarely venturing onto property during the day and avoiding people as much as possible. For as bashful as these creatures are, they become decidedly bold after dark, sneaking onto lawns and wiping out gardens, shrubs, decorative trees and plants. Overzealous deer can kill a large shrub within a single feeding, eating the tiny buds that have closed up for winter dormancy. This vegetation destruction is what makes homeowners seek advice about getting rid of deer.

It’s important to know that White Tail Deer are not like other problem animals. You are very unlikely to remove deer from your general area, especially if you live in a rural setting or near a wooded lot. Deer have a territory of a few miles, overlapping other territories of other deer. They are not overly concerned with maintaining borders, and deer will often change their travel patterns and areas depending on the weather and available food. If you were to trap and relocate a deer, which is not the traditional method of control, you would likely have a new deer in your yard within a day or so. There is no wiping out the deer population. If you’re having issues, the best methods of control have to do with home and property maintenance.

Deer are grazers. They spend the majority of their waking hours feeding on whatever vegetation they can find. Because they emerge mostly after dark, deer are comfortable invading yards and gardens since there is not human activity at that hour. If you have a garden or a line of shrubs and deer have been a problem for you, cover the plants with a breathable, light-weight material. Burlap sacks are the most common wraps used on shrubs, secured at the base to prevent them from being pulled off. Whatever fabric you use, it must be secured. Deer will still attempt to get through the fabric, but they will be discouraged easily if the task seems too difficult. When covering plants, care must be taken to remove the fabric as soon as possible the next day to prevent damage from the cover itself. Some plants pose more difficult dilemmas than others. Fruit trees can be a powerful lure for deer. Keep the ground beneath the trees free of fallen fruit. Clip any low-hanging branches. If the tree is young and still short enough for a deer to reach, fence the area around the tree to prevent damage. A hungry deer will not only eat leaves and fruit but bark as well. Fencing is very effective against deer as long as the fence is tall enough to prevent the agile creature from bounding over it.

Dogs can be good deer deterrents, but only if the animal is loose within the property. A confined dog will not concern deer after a period of time. Like most animals, deer learn things about their environments, and a kenneled dog is eventually learned to be safe.

If you’re lucky enough to be starting off in your gardening career, there are plants which are naturally deer resistant. Most of these decorative shrubs and flowers will be advertised as “deer safe”, and for the most part that description is accurate. Never underestimate a hungry deer. In a harsh winter, these grazers will eat just about anything to survive.

Of course there are a number of repellents on the market for deer and a few home remedies that might make you smile. Coyote urine pellets are one of the most popular deterrents on the market. These pellets seem to have a sound reasoning behind them, but the reality is that they significantly lose their potency once placed outside, and like the barking, kenneled dog, a deer will eventually learn that there is no threat present. Home remedies such as Ivory soap or human hair in the garden are a waste of time. If deer were that afraid of human scent, they wouldn’t venture that close to your home in the first place. The origins of the Ivory soap theory are a mystery—it’s just soap.

You can hunt deer when the season comes around, but don’t rely on this as a form of deer control. In fact, it’s illegal to hunt close to a house, even if it is your own. Killing the one or two deer allotted during hunting season won’t stop others from entering your yard. By using smart property tricks, you can easily prevent the damage caused by deer. These animals make up a large portion of the wildlife in many regions. Prevention is the only practical way of control.

Deer refer to the many species of deer-like animals that are seen throughout the North American continent, South America and Eurasia. We are discussing the White Tailed Deer. These are some of the most loved and hated creatures in the Western world. Deer have been essential to our food supply and they remind us of our connection to nature, but they are also the bane of car drivers and gardeners. Deer have caused many car collisions by running onto the roads at night. Deer venture out in the time of dusk and dawn as those times are not too cold and not too hot.

Deer’s appearance is well known but is best described as a taller animal that has a brownish or grayish coat and can have markings or speckles of white and black depending on the species. Deer have strong powerful bodies with durable legs and hooves that are adapted to navigate tough terrain. However, deer are known (and desired) for their antlers that they grow and shed each year. The number of points on the antlers corresponds to the value of the set. For example, anything above five points is good. Deer range in size, with the females being smaller, but can weigh anywhere from 70 to 700 pounds.

Deer have teeth that are specialized for the chewing of vegetation and their stomachs are designed to support regurgitation of food, also called cud-chewers where they will continually vomit their food back up and eat it again. This sounds disgusting, but this feeding method enhances the nutrients that they can get from any one feeding session.

Deer can live in any type of climate or temperature and the different species have evolved to adapt better to certain climates. For example, deer that live in frigid areas in North America are usually larger and have heavy, shaggy coats whereas deer in the southern part of North America are smaller and have finer, down-like coat. Deer can live in tropical rainforests as well in desert climates and frozen tundras. However, they are mainly associated with forested areas where they have readily available food sources and have places to take cover from predators.

Female deer do not become sexually mature until 1-2 years of age and will not breed until the fall after they go into heat or may even wait until the next year. When a female deer does go into heat she releases a pheromone that triggers the male response to mate and will cause territorial fights among males. A female deer will give birth up to three fawns in the spring. The fawns will not do much walking or foraging for the first month of their lives, but will begin to follow their mothers around after that. The fawns will eventually leave their mother’s care around the age of one (for males) and two for females. Deer have an average life expectancy of up to 15 years if they can avoid roads, but far too often deer are the victims of the unsuspecting driver.

Deer have played an important role in the lives of humans, and while some consider them pests for eating up vegetable gardens and causing accidents, many consider them to be an important presence in our lives. Deer provide food and clothing for many people still to this day and deer play an important part in our folklore. Deer were once thought to be messengers of the gods, sent to feed us and clothe us. Gods or not, no one can argue that deer support the American economy and remind us that even though we live in cities, nature is never that far away.