Need hog removal in your hometown? We service over 500 USA locations! Click here to hire us in your town and check prices - updated for year 2020.

Feral Pigs are usually classified as a pest species because they will completely destroy a lawn. I mean, it looks like a rototiller went through your yard. Pigs root through the dirt in search of food, and there's no stopping them. The most common complaints include the following:

For these reasons, many people wish to have nuisance feral pig trapped and removed.

If you absolutely must get rid of a feral pig, you have two options: hunt and kill (usually with gun) the animal, or trapping and removal of the animals, in very large cage traps. I will discuss trapping first, and then further down the page, I discuss some options for keeping wild hogs out of your yard.

How To Trap A Wild Pig - Wild pigs are not a native species to North America, having been introduced to the continent by European explorers many centuries previously. Because pigs are able to utilize so many different food sources, it has made them particularly successful at surviving away from human contact. Although some people will hunt these wild pigs, the majority of those that come into contact with wild pigs will do so when they are attracted to the aroma of garbage and start rooting through bags to see what has been discarded by people.

The Right Trap To Catch A Wild Pig
There are many different traps that can be constructed to catch a wild pig, and the vast majority of these will either be a cage trap or a pen trap working in the same way. The basic premise is that the wild pig will go into the pen or cage to get access to the food inside, and the door will then close behind them to hold them until the trapper returns to the trap. Most of these pens will be designed to catch a single animal, but if you do catch a wild pig in mating season then it is possible that young piglets may be found near the trap if the mother has been trapped.

There are alternatives such as a leg grip trap which will also hold the animal, and these can be designed to be lethal or live traps depending on the individual’s preference. Many cultures have long histories of trapping wild pigs for meat, but the effort of making pit traps or other alternatives will rarely be worthwhile when compared to the alternatives. 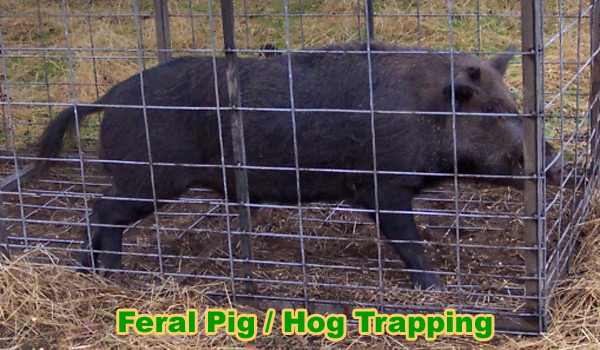 Choosing A Good Location And Suitable Bait For A Wild Pig Trap
There are many different foods that will work as good bait for pigs, and because they are omnivorous they will often eat many different types of food depending on their environment. Small lizards, insects and crawfish will often be very attractive to a wild pig, as is a collection of plant roots of even sour mash.

Sites where there is significant wild pig activity will often be easy to identify because there is so much damage and destruction caused. Plants and grass on the floor will be almost non existent as the pigs will have rooted through the ground catching grubs and insects, so this will be a good place to start when it comes to placing the trap. Wild pig traps should also be placed away from areas where people and pets are likely to come into contact with them, as these traps can often catch animals that aren’t actually wild pigs.

Handling And Removing Wild Pigs
Because the wild pig is not a native species to North America, it will usually be illegal to release a wild pig back into the wild in the United States. Most states will insist that the animal is euthanized once it has been trapped, and many people will actually trap wild hogs specifically because of their value once it has been killed. They will often carry diseases that can be transmitted to humans and livestock, so isolating the wild pig is the best policy.

It is important to bear in mind that wild pigs are likely to be angry and frustrated once they have been caught in a trap, and handling them is not advised. Many wild pigs can have tusks, and these are particularly dangerous and can cause significant injury to people that have been careless when approaching a wild pig. It is often worth contacting your local government agency who will be able to issue further guidance and advice about what can be done with a wild feral pig. 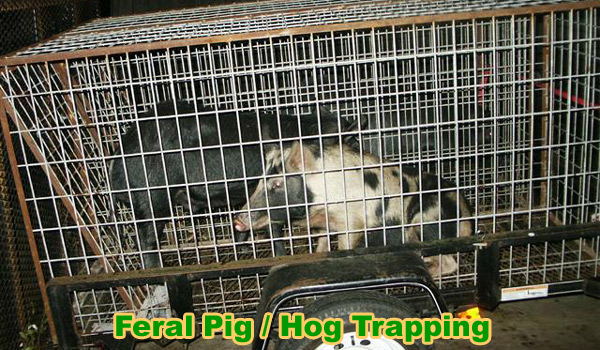 How to kill a wild pig - there are many hunters who specialize in this, with both rifle and bow and arrow. It's a serious game hunt, so I don't think your average homeowner with a messed up lawn is going to undertake the task of killing feral pigs themselves. If you want to kill a wild hog, I'd call a pro who specializes in feral pig removal or hog hunting.

How To Get Wild Hogs Out Of Your Yard
Finding a wild hog in your yard can be quite a scary experience, as many of the larger hogs can become quite large, and they can also be very unpredictable when they are confronted by someone. They will often have been attracted by the smell of garbage, and if your garbage is accessible then the hog or hogs may well have ripped it to shreds before you actually find them in your yard. In the majority of cases these hogs will be wary of humans, and will escape through the same way that they have entered the garden, but if this doesn't happen then do not try to corner the animal, as they can do a lot of damage.

Dealing With The Immediate Problem
Apart from getting over the surprise of encountering a wild hog, the first and most important thing is to get the animal out of your yard. Because they will naturally look to flee rather than look for confrontation, if you have a large yard, simply stepping through the door into the yard quite noisily will be enough to frighten off the wild hog. They will also be frightened by loud noises such as gun shots or fire crackers, and can also be scared away by flashing lights. If the hog doesn't respond to any of these stimuli to turn and run, then it is possible that it may be injured or ill. In this instance, it is best to call your local government agency that deals with dangerous wildlife, or a wild hog removal expert if your state doesn't have staff to deal with it.

Hunting Wild Hogs
There are many people in the United States who will shoot wild hogs if they encounter them, and others who will actively hunt these animals. If you do have a wild hog in your yard that shows no signs of leaving, and is continuing to cause damage then a friend or neighbor may be able to shoot the hog for you. This isn't the perfect solution, as it can leave you with a carcass to deal with, and is particularly a problem in urban or suburban areas.

Protecting Your Yard From Wild Hogs
Many areas and states of the USA are afflicted with the problem of wild hogs, and these feral pigs can be a massive problem when they find their way into the yard, so the best solution is to stop them from getting in to the yard in the first place. A good strong wire mesh fence that has been embedded at least six inches into the ground will be a good place to start, and this should be well maintained to ensure that any weak spots that may develop from inquisitive hogs are quickly repaired.

If you do have a dog, then giving it free reign to run about in the yard and to leave its scent across the yard may also help to deter the hogs, but only if done in conjunction with steps to prevent the attraction of wild hogs.

How To Stop Attracting Wild Hogs To Your Yard
There will usually be specific reasons why the wild hogs are being attracted to your yard, and these will usually be associated with their voracious appetites. One of the most important things to do is to ensure that any garbage that you do store in the yard is done so in a trashcan with a tight fitting lid that will allow minimal scent to spread. It can also be worthwhile to install a band of plastic mesh around your garden that is held up an inch or two off the ground, as hogs will avoid walking over anything that will tie their legs up. This is relatively inexpensive, and can also be helpful if you do grow plants or vegetables in your yard.