How to Get Rid of a Fox 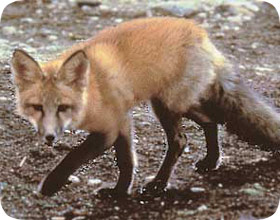 They say that when you start missing some chickens, pigeons or other small animals then it may be a good time to begin searching for a ‘fox in the henhouse.’ These small predators are considered a real nuisance to the rancher or farmer and usually require fox removal. Foxes are mostly known for going after chickens but have been caught on the prowl for other small prey. The fox is from the canine family and is about two and a half feet long and weighs up to fourteen pounds full grown. This makes him an agile predator that is capable of tearing through cages when after a meal.

The Fox Habitat And Hunting Patterns
These solitary canines live in dens and hunt an area surrounding it for small rodents, rabbits or birds. They can be a shy and secretive animal but are not afraid to take on somewhat larger animals if they feel threatened or are protecting their babies. The most common fox in the United States is the Red Fox and they are considered the most bothersome.

Foxes prefer open country with some cover, such as a farm or ranch that is near the woods, though they are known to make a den under a home or porch. They have keen senses and use this to stalk their prey. They do most of their hunting early in the morning and late evening, while sleeping during the day. Springtime, foxes are more active while feeding their offspring, since breeding season is in the winter. In most cases this canine will kill its prey and bring it back to the den. If there is anything left they will bury it. The fox will hunt within its own territory which is close to their den. They will scavenge through garbage as well as stalk a farmer’s henhouse and therefore may need to be relocated.

Trapping and Removing Fox
The Fox is a furbearer and in the United States have certain considerations for removing them, so you will need to check for regulations in trapping these animals. Trapping is an effective way to remove foxes but if you don’t have experience, the fox is smart and will learn how to avoid you and your traps. If it is in the springtime you will also want to locate the den and catch the pups. The best time for den trapping is early in the morning or late in the evening when they are more active. It is suggested that you contact a professional trapper when trying to remove a fox from your property.

There are some people who suggest deterrents such as fox urine, large dog silhouettes and even poison. There are also some who would choose a lethal trap as opposed to a live trap for fox removal. Truly most deterrents don’t actually work, lethal traps are often very cruel and relocating a live animal should be left to the professionals.

Professional Fur Trappers & Fox Removal
Since wildlife agencies regulate what traps to use and where, it is best to find someone qualified to handle the removal. The best places to put traps are along fence lines, trails, and ponds. There is special equipment that is required to trap, so if in doubt call a Professional Wildlife Removal firm that can answer your questions and lead you in the right direction.

Prevention - One of the best ways to get rid of foxes is with preventative methods. Foxes will return to an established den every year so once the fox removal is done you will want to have something to prevent them returning. The best way to prevent foxes from entering into your property with a wire fence with no more than a three inch gap at the bottom. If you bury the bottom of the fence two feet in the ground, the fox will not be able to dig under it. Some can climb fences, so be sure it is high enough to deter the fox.

For more information about how to get rid of a fox, go to may main fox removal page.