How to Keep Moles Away

Need mole removal in your hometown? We service over 500 USA locations! Click here to hire us in your town and check prices - updated for year 2020.

Mole Prevention Tips: Moles are adept at eliminating the insect and worm population of their habitation, but this comes at a price for any homeowner or farmer on whose property they live. They will ultimately damage the lawns and gardens with the tunnels they build underneath, leading to the collapse of sections with time as people tread on them. Moles can also make your well cultivated garden look dirty by building mole hills in it. Therefore, most house owners would rather keep their gardens free of these little creatures. There are several means by which you can keep the moles away, some of which are detailed below:

1 - Underground fences
Construction of underground fences can be costly and time-consuming, especially when the land area to be fenced is large. However, they are an effective long-term means of keeping moles away from your garden. To prevent moles from invading your space, use underground fences that are made from galvanized hardware cloth. The fence must be at least 24 inches below the ground so that moles cannot dig under it. It should also be about 6 inches high and must extend to every side of the garden, thereby preventing entrance from any angle. The base of the fence should bend at about 90 degrees to prevent moles from climbing it.

Galvanized material is best used for the fence to avoid it rusting, which can result in the material breaking easily and giving way to moles. Examples of such materials are aluminum sheathing or stainless steel wire mesh; these are strong and durable. Chicken wire mesh would not work for moles because of its wide spaces through which they would pass easily. 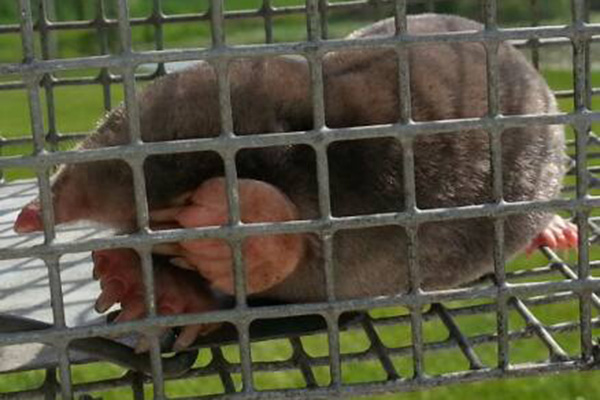 2 - Gravel pit
Another way to go about keeping moles from digging under your fence to access the garden is to dig a pit around the fence or garden and fill it up with gravel. Although moles can dig very well, they cannot dig through gravel as it is too hard for their claws. The gravel filling should be at least one foot deep so the moles can’t get beneath it to dig.

3 - Remove food sources
The primary reason that nuisance animals invade residential areas and gardens is no other than to find food. It follows that if their foods are not available, they will not find your lawn attractive and any pest already in residence is likely to move out. The mole's favorite foods are worms and insects, so it would be a good move to eradicate these in the following ways: 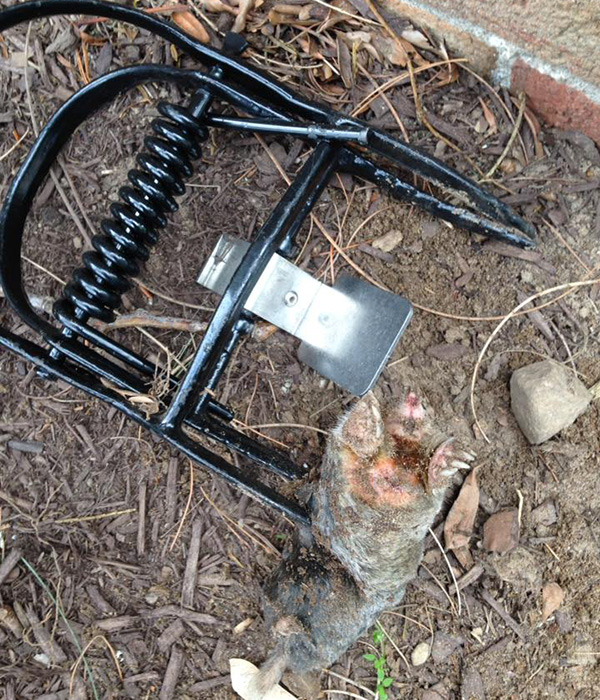 4 - Employ domestic pets
Moles are naturally afraid of these animals and their presence on your property is sure to keep the furry mammal away. Domestic pets like dogs and cats habitually chase sighted moles down and may kill them.

6 - Shovel or pitchfork
The traditional way to keep moles out is by using a shovel or pitchfork to collapse the tunnels made and inhabited by moles in your yard or garden. Their mole hills are visible evidences of the tunnels built under. Destroy the tunnel mounds and the moles will move out by themselves.

7 - Rocky lawn
Replace the carpet grass in your lawn with stones, clay, or gravel. Grass is more conducive for the grubs and bugs that serve as food for the mound-building moles. And of course, moles cannot dig through rocks.

8 - Chemical repellents
A common solution for mole infestation is to apply a castor oil-based mole repellent to your yard. This works in two ways – by irritating the mole with its offensive odor, and by coating earthworms and making them unpalatable to the moles.

For more Mole Prevention Tips, go to may main mole removal page or the How to Get Rid of Moles page.

Tips to Keep Moles Away

You will find moles on almost every continent on the planet, with the exception of South America and Antarctica. If they have managed to make their way to all of those places around our Earth, getting into your garden really isn't going to be the most difficult task in the world. They live underground in vast tunnel systems, and these can be anywhere, from underneath gardens, lawns, and parks, in urban areas and grasslands, sand dunes, and practically anywhere else that has ground soft enough for the creature to move it.

According to studies, these moles don’t seem to like mountainous regions very much, and they also have a rather disliking to soil that has a high acidity. Apart from that, they do rather well hidden beneath the earth, with everything they need right to hand. They build tunnels that serve for specific purposes, such as food storage chambers and birthing spots. It is not unheard of for generations of moles to live in the same tunnel systems, and with plenty of food down there, they have no reason to leave unless they are forced out. In many cases, home and property owners are not aware of a mole problem until actual mole hills start to appear on their property. If you have a lot of land or a rather large garden, this might not be immediately obvious.

Keeping moles away requires a process that protects your property from underground. You can put all the fencing systems in the world up and use all of the expensive ultrasonic devices, but they will either not do the job at all, or they’ll only do it for a little while. Most repellents are incredibly ineffective, and can also prove to be costly when used over long periods of time, and all the time the mole is left on your land, it is left to cause damage and wreak havoc. In worst-case scenarios, mole tunnel damage can actually upset the structural foundations of buildings, and this including homes as well as outbuildings, workshops, and sheds or garages.

Underground protection doesn’t need to be overly complex. A mesh wire fencing can go a very long way to protecting your land, and this will involve first digging up a trench all the way around the area that you wish to protect, about a foot or two deep. The mesh wiring should be placed into that trend, after being moulded into an ‘L’ shape. This shape prevents the creatures from burrowing under and up the other side. When filling the hole, consider adding small rocks or gravel to the earth. These stones make it uncomfortable for the mole to dig through, and you can use the same process to protect smaller spots too. If you have a small vegetable patch growing for the kids, for example, you could dig a small trench around that vegetable patch and then fill it with the earth mixed with stones, gravel, and rocks.

The good thing about moles is that they are quite solitary animals. You will rarely find more than one mole residing in the same tunnel system, unless it is a mother with her young. If you were to look at a one acre square patch of land, it would be very unusual to find more than three or five of the creatures. This can work in your favor because it means you have fewer animals to get rid of. You cannot forget that the mole could be a mother with her young, and that means finding and removing the young before you take any action to keep the mother out.

This underground protection will help you, not just against moles, but against other animals too. There is a wide range of critters that dig beneath the ground, squirrels, raccoons, moles, rats, and opossums, just to name a few. If you have an overground fence around the perimeter of your land, it will go only go so far to protect you. It takes just a ew hours to add that underground fencing barrier, and you will thank yourself for that later on. When the winter comes and these creatures need to find warmth, or the spring comes and these animals need to find safe and sheltered spots to have their babies, you could be inundated with them. The more these animals are forced into human territories, the more we are all likely to encounter problems with them. The best time to act is now. Protect your land before nuisance wildlife becomes a problem. Read the guide About Moles.

Go back to the Mole Removal page, or learn tips to do it yourself with my How to Get Rid of Moles guide.