Need mole removal in your hometown? We service over 500 USA locations! Click here to hire us in your town and check prices - updated for year 2020.

Moles are animals that live a majority of their lives below the surface. With a more cylindrical looking body, fur that is smooth and almost like velvet, and very small eyes and ears, these animals have become some of the most well-known and yet least known about animals on earth.

Moles are found mostly in North America, Asia and Europe. They are truly animals that are found only above the equator. Some have stated that moles live in Africa and Australia, but these are not true moles. Animals such as desmans and shrew-moles are mistakenly referred to as moles, but they are not classified as such in the taxonomy.

Moles have unusually large claws in comparison to the proportion of their bodies. This is necessary for them to be able to dig, often in very hard clay or rock so that they can continue to dig the tunnels they need to move from one location to the next. In addition, moles have an extra thumb on their forepaws, giving them six total digits. This gives greater skill at moving the earth. For more information, read the guide About Moles. 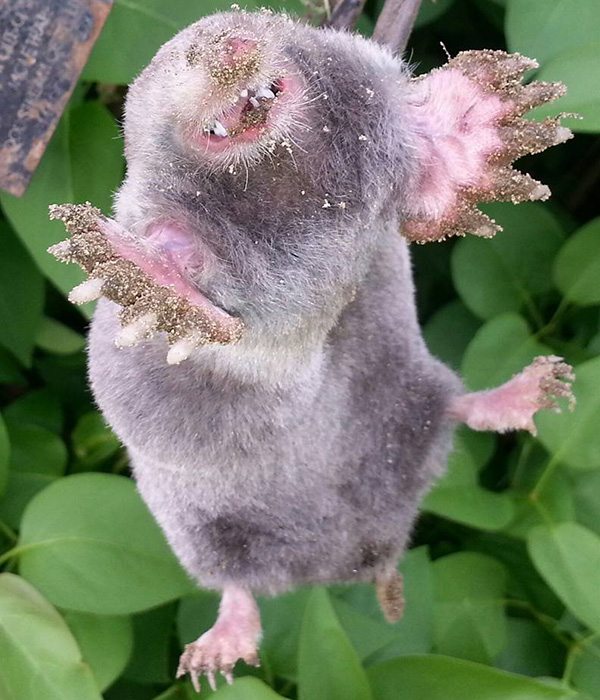 One of the most interesting parts of moles is their ability to breathe under the earth. If you think about it, a mole will dig into places where there is a significant drop in the amount of oxygen available, and so the mammal needs special traits that allow it to be able to accomplish this. First off, moles are able to tolerate much larger amounts of carbon dioxide in their systems that other animals. In addition, they have special blood cells that have a protein called hemoglobin. This allows them to reuse the oxygen that is inhaled above the ground and breathed out below the surface.

Moles primarily things that you would find in the earth itself. This includes such things as earthworms and other small invertebrate animals. They will also eat a wide variety of nuts. One of the more clever aspects of the mole is that they build their tunnels with special traps built into them. This makes it so that as earthworms dig through the tunnel and find the surface below them get trapped and become easy prey to the mole. Moles do not eat the earthworm right away. They first squeeze out the earth and dirt that are inside the guts of the worm before consuming it.

Moles will breed between February and May. A high pitched squeal by the male lets the female know that they are available, and the males will also tunnel into areas that are not familiar to them in search of a female partner. Once impregnated, the gestation period lasts about seven weeks. Three to five young are born in a litter at one time, which usually occurs between March and April, but has been known to occur as late as July.

Inland moles are more likely to mate in the late part of February, early part of March, while coastal moles mate in late March through April. The coastal variety also has larger litters than their inland counterparts.

After 30-45 days the pups will leave the nest to find areas of their own to live. They are usually able to fend for food and to tunnel by about three weeks.

Moles live a solitary lifestyle. They only come together with other moles for the purpose of mating, and are willing to fight aggressively to protect an area they have claimed as their own. While territories do overlap, this usually does not matter because the tunnels make for layers of territory as well. However, when a tunnel system encourages upon another mole, fighting is bound to begin.

Because of the velvety texture of the moles many fur traders find their pelts to be a hot commodity. The skin layer under the fur makes for quite good leather. The fur is found to be in such high demand because there is no real clear forward or back to the fur lining. This is because moles are just as adept at moving backwards as they are forward, and cannot have their fur limiting their ability to move quickly. In fact, there fur is one of the things that gives them greater agility, as the slick feeling allows them to move more quickly through tunnels.

Moles are commonly hunted because they can be quite a nuisance in farm areas and where livestock are held. Not only do they destroy crops and farm land, but the holes they create are often hazardous to livestock who do not see the holes and step in them injuring themselves. Many horses, cows, goats and other animals have stepped in the holes and broken their legs, causing owners to have to destroy the animal. This has cost farmers and ranchers millions of dollars a year in loses due to moles.

For more information, go to may main mole removal or the How to Get Rid of Moles page.