Need otter removal in your hometown? We service over 500 USA locations! Click here to hire us in your town and check prices - updated for year 2020. 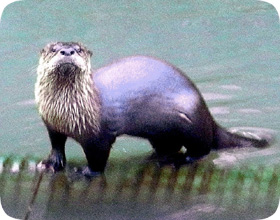 How to Get Rid of Otters - Otters are an intelligent bunch, and their living spaces are just as complex as the manner in which they play and communicate. The trouble with otters is that they are smart enough to act on opportunity when it presents itself, making them prime culprits in raids on commercial ponds and hatcheries as well as private, stocked ponds. In an otter’s eyes, an overabundance of food in places like the aforementioned only means one thing—easy dinner. This can be a huge injury to any stocked pond or commercial venture. Otters need to eat constantly and will quickly deplete an area of fish.

Once otters move in, they quickly start shaping the land around them to suit their needs. Otters not only have deep burrows that extend into embankments, they have grooming areas above ground and designated bathroom zones. If the sudden decline of your fish population wasn’t enough, now you have to worry about mounds of otter waste around the facility as well.

Getting rid of otters can be challenging, especially because of how agile and adept they are at maneuvering through the water. No matter the nuisance animal, people are determined to try chemical and holistic remedies to their wildlife problems. Otter control stems from pepper-based soil additives to Listerine bombs. Yes, Listerine bombs. The theory behind these is that the potent aroma and flavor will prevent otters from eating certain vegetation. It sounds good, right? Well, if the source of food for otters wasn’t primarily found in the water, maybe Listerine would stand a chance. In other words, don’t waste your time. On par with other semiaquatic species, poisoning is not recommended, and there is no approved poison for otters.

Otters are extremely intelligent and playful, and their curious nature makes them naturally resistant to decoys and urine deterrents. An otter is more likely to investigate a fake predator statue than run away from it.

If it is truly necessary to remove the otter, the best method is trapping. Prior to using this method, contact your local environmental agency. Some states have an otter trapping season, and if you are attempting to remove a problem animal outside of that time restriction, special permits may be required. Once all your paperwork is in order, it’s time to select your traps. You can use lethal traps on otters, but you must be very careful in your selection as otters can be quite large. An improperly sized trap may result in an injured otter, and it is not okay to create undue suffering for these animals. Be sure any body gripping traps are designed specifically for otters. Also be sure to check with the local authorities about lethal trapping. Otters are protected species in some areas of the country.

Because of their endearing nature, many professionals prefer to use live traps. Cage traps are effective when baited with salmon oil or another enticing substance, but the most effective live trap for otters tends to be the longspring and coil trap, leg hold devices which will humanely hold an otter in position until you can relocate it. Despite the common misconceptions about leg hold traps, the modern set can firmly hold an animal without causing severe damage to the limb being held. Because you will have an otherwise uncontained animal caught in this type of trap, leg hold devices are best left to professionals who know how to handle a live otter once it is caught.

Relocation of an otter can also be tricky. This animal needs deep enough water and soft banks to create a viable home. A stagnant pond left over from strip mining is probably not a suitable place. Do some research and relocate the otter into a habitat that can support it.

There is no doubt that an otter can cause severe damage to a fish population, but these animals are also excellent patrollers of nature’s waterways, keeping them clean and healthy. If possible always consider live trapping and relocation for otters. In areas where they do not interfere with man, these animals are excellent contributors to their eco systems.

Otters are one of the most beloved of semi-aquatic mammals, but are often mistaken for beavers. Otters can be found in many different types of climates all over the world as long as there is water for them to swim and hunt in. Due to recent findings in fossil records, it is now known that otters have been a successful species on this planet for more than 30 million years. However, even though the otter is a resilient little creature, certain populations of them are becoming endangered due to pollution of smaller bodies of water and destruction of natural forest land where they make their homes.

Otters are smaller creatures that rarely grow up to four feet long and weigh about 30 pounds, which is comparable to a medium-sized dog. They have long and broad tails, much like that of a beavers which they use to swim and to fight. Their coats are a dark brown color with white or cream colored markings on the face. However, they are well known for the long whiskers on their face which give them a cute and cat-like appearance. However, do not assume that because otters are cute, you can walk up to them as they are very territorial. While otters do not attack humans or other animals and usually keep to themselves, if you find them making noises at you and flapping their tails, you should turn around and walk away. Their anatomy gives them the unique ability to live both in the water and on land, which is also why the species has been so successful up until now.

Otters can be found anywhere where there is cold water nearby. While they usually prefer freshwater, they will also live in saltwater near oceans as well. They will often make their homes around secluded rivers, lakes, ponds and streams that are shallower and have easy access to land. These bodies of water are usually located in forests, wetlands or even swamps and marshes. Otters will make their burrows, also called a holt, near the water with sticks, reeds and mud but will also take up residence in a burrow in a bank or in an abandoned beaver den.

Otters are considered omnivores and will hunt for food both in the water and on land. Most of their activity is directed at hunting and eating their food and on a daily average will consume almost half of their own body weight. The main types of food that an otter will eat are fish, medium sized birds and insects. However, they have also been known to eat other sea creatures such as frogs, crawdads and crabs.

The mating season for otters depends on the location, with those living in warmer locations being able to mate more than once per year. After the female otter becomes pregnant she will carry the young from five to eight months and will give birth to a little that is no larger than four pups. The young will stay with their mother for their first year of life while they are learning the valuable skills of hunting and surviving. Otters do not become sexually mature until the third year of their lives, which makes them able to care for their young longer. Otter mothers take very good care of their young and are very protective of their holts.

Otters are also very sociable creatures that spend most of their time (when they are not hunting or eating) playing with each other. Playing includes chasing each other in the water or wrestling on the ground and may be confused with fighting. They have also been known to make slides out of slippery river banks and will construct toys out of sticks and stones to play with. It is this unique ability that makes otters so fun to watch.