Need porcupine removal in your hometown? We service over 500 USA locations! Click here to hire us in your town and check prices - updated for year 2020. 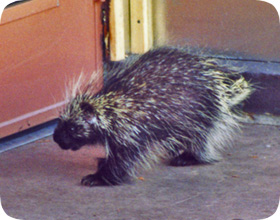 How to Get Rid of Porcupines - Porcupines will not take over your home in droves, but just one of these animals is often enough to make homeowners seek ways to remove it from their property. Content to live in the woods, droughts and starvation will occasionally drive a porcupine toward human dwellings. The trees and shrubs we use to decorate our yards often have smooth bark, something that these large rodents enjoy eating. It won’t take long for a tree to be stripped of its bark, killing the tree, and most people don’t like to see their expensive, decorative shrubs suddenly dead. Porcupines also like root vegetables. If starving, they won’t be afraid to venture into a garden.

Because the food supply is often readily available and accessible, porcupines can become nuisances when they decide to create burrows under decks, porches, or sheds to live near a food source. Porcupines love salt, and plywood around a property can fall victim to them due to its high salt content.

To get rid of a porcupine, start with general exclusion tactics. Fencing around your trees and shrubs will prevent this rodent from reaching them. Gardens should also be fenced. Porcupines have been known to actively seek cat and dog food. Make sure pet food is not left outside, and any pet doors should be closed up for the night. It’s not unheard of for porcupines to wander into a home through the pet door in search of cat chow. Though still considered a prey animal, these rodents are relatively unafraid of house pets. Their quills are an adequate defense against most animals. Curious dogs often bear the brunt of a porcupine’s defenses when one is found near the home.

Fox urine is marketed to homeowners as a repellent for most wild, prey animals. The reality is that porcupines are rarely preyed upon by foxes. Both animals are of similar size, and the porcupine’s quills are a huge deterrent to the smooth-coated fox. Porcupines and foxes are not natural adversaries in the wild. Fox urine will do very little to save your trees and property. The hands-off options beyond urine capsules are few. You can’t poison a porcupine, and no decoys or ultrasonic repellents will save you.

Once your exclusions methods are in place, and before you can seal up the spaces under decks and out buildings, you need to trap and remove your porcupine. Each state varies on the laws regarding trapping, but you need to be sure you are allowed to capture a porcupine before you spend money on a trap. Hefty fines can be incurred if you are caught trapping without the proper licenses. If all is in order, you can place your live trap near a burrow site on the property. Salt and foods with high salt content will be best to use as bait for the trap. Porcupines are not overly suspicious because of their natural defenses, so chances are you can set the trap the first night it is out. You will want to set it up for overnight; porcupines are nocturnal.

Once you have the porcupine, what are you going to do with it? Most live traps, especially those of the cage persuasion, offer a safe way to capture the rodent and remove it to a new location. Thankfully, porcupines are not inclined to travel long distances to return to previous burrow sites. Relocate the animal in a protected area with an ample, natural food supply. Oh, and don’t be too fearful of the quills. The barbs on a porcupine can’t shoot at people, though contact with them can be very painful.

When the porcupine has been safely removed by you or a wildlife professional, now you need to finish crafting your yard’s defenses. Once trees and vegetation are protected, close off any open spaces under porches and decks to eliminate the chance of a burrowing pest invading you yard again.

Porcupines are small rodent-like mammals that live in most parts of the world such as in Asia, Europe and in Africa. Even though they can be found living in all parts of the world, the largest porcupine populations live in the western part of the United States and in Canada. They can be found living in ecosystems like forested areas, grasslands or meadows and in some semi-arid or desert areas. They are very resilient animals that can withstand many different climates because of their excellent defense mechanisms and varied diet.

Porcupines are well known for their appearance. What is so unique about these animals is that they have a thick layer of soft brown/black fur with thousands of long quills that lay flat along its back, sides, head and tail. When porcupines feel threatened all of the quills will stick straight out, but cannot be shot at predators, but they come out very easy when in contact with another animal or human. The quills are very sharp and needle-like and have barbs on them that make it difficult and painful to pull them out. Furthermore, the quills have an oily substance on them that can cause burning and itching.

Porcupines do not attack other animals because they do not need to, their quills are sufficient in giving them all the protection that they need. And when the quills either fall out or all pulled out during an encounter, the quills will grow back at a somewhat rapid pace. It is said that the North American Porcupine has over 30,000 quills at any given time. Porcupines grow to be about a foot long and walk on four paws. They also have long, powerful teeth that they use to eat wood. Wood from tree bark and logs are the primary staple in a porcupine’s diet, but they will supplement their diet with nuts, fruits, berries and bugs that they can find in the wild. Their diet also depends on the type of climate they live in, obviously the porcupines that live in desert areas will eat more fruit and bugs than bark than those living in forested areas.

The female porcupine will have anywhere between one to four babies in a litter. The young are born with quills, but the quills do not become hardened for a few days. Porcupine babies will open their eyes around ten days after birth when they will start to learn what it takes to survive in the wild, and after about two months the young will be able to live and take care of themselves without the help of an adult porcupine. The average life span of a porcupine is around five to six years, probably due to their wonderful defense mechanism of the quills. Not many predators want to try to eat a porcupine twice.

After the young leave home they will become solitary animals, only congregating around the mating season. Porcupines are mainly nocturnal animals so that they can avoid many of the larger predators. While many predators like dogs, foxes, coyotes and bears may try to eat a porcupine if they are hungry, the only predator that is specifically adapted to hunting the porcupine is the fisher cat which is a marten/weasel like animal. Fisher cats only live on the Pacific Rim area of the United States and Canada. During the day, you can find porcupines snoozing in hollow logs, abandoned fox or rabbit burrows and in rocky crevices in bluffs and cliffs.

While porcupines are sought after for their quills, they are rarely messed with because no one wants a handful of itchy barbs. Porcupines are quite a successful species of rodent and are not in any danger of becoming endangered.