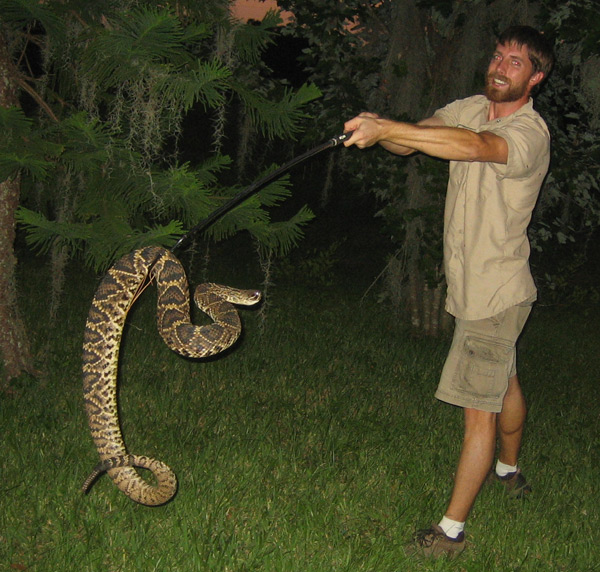 Here I am in my backyard, delighted to be holding a huge and deadly Eastern Diamondback, caught right here in Orlando, FL - October 8th, 2005 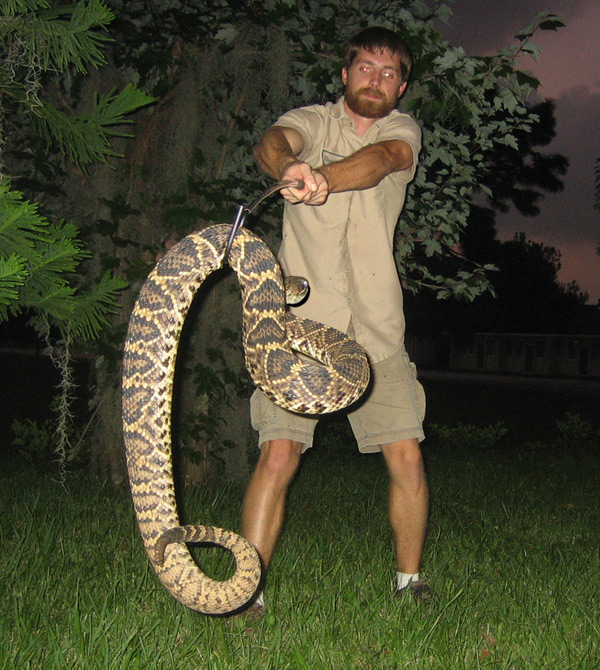 The snake was very heavy. Note how my snake pole is bending. Also note that I'm keeping my distance. This is North America's deadliest snake. It's also an incredibly fast striker, whose strike has been clocked at over 175 miles per hour. 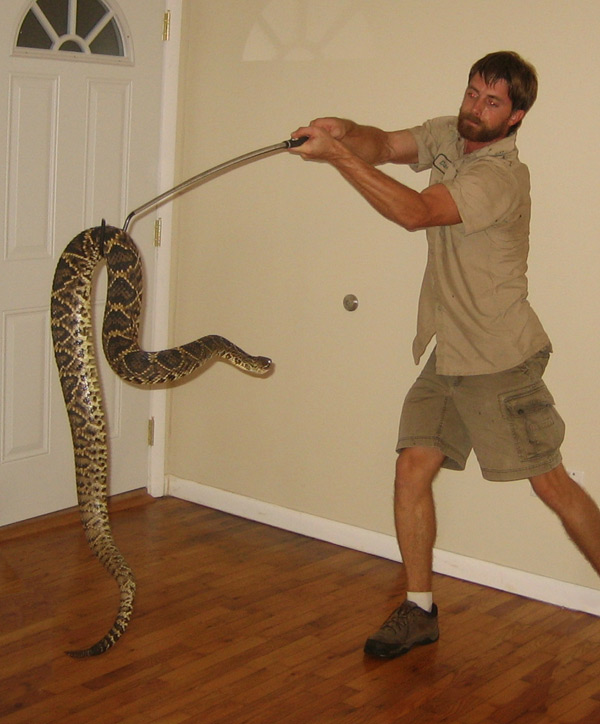 Indoors after it got dark. These photoshoots were not easy, as the snake was aggressively striking at any opportunity. This is not a snake to be treated casually! You may notice me sweating a bit. 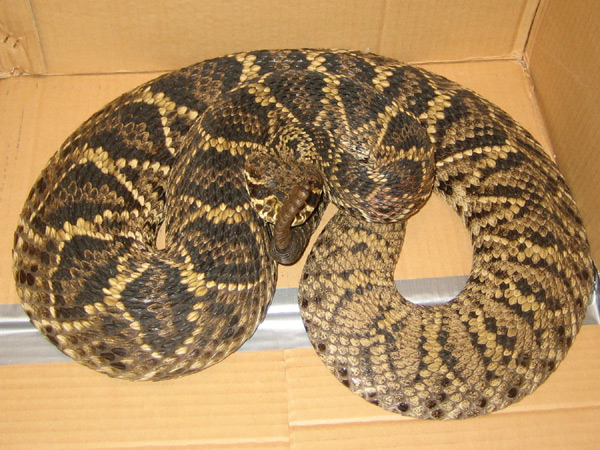 And back in the big cardboard box. I did not kill this magnificent specimen (nor did I measure it).

Eastern Diamondback rattlesnake - The eastern diamondback rattlesnake lives in throughout the Eastern part of North America. It is the largest of the pit vipers, growing to be eight feet long and weighing up to ten pounds. A diamondback is easy to identify by its characteristic black diamond color pattern and the rattle on its tail. The rattle itself is composed of dead skin, and every time the snake sheds a new piece is added to the rattle. These segments break and fall off, so it is not a reliable gauge of the animals age. Despite common depictions in movies, the rattlesnake will shake its tail if it feels threatened, hoping that the enemy passes it by. A rattle does not mean imminent doom. If you accidently approach a rattle snake, the best thing you can do is slowly back away. When you are far enough away, the snake will stop rattling its tail. This snake will live in the burrows of other animals. It is also a proficient swimmer and climber. Because of the demand for rattlesnake meat, the population of the species has significantly decreased over the last decade.

What do you do if you find a rattlesnake in your house - There are a few options if you find a rattlesnake in your house. First, if possible, leave a door to the outside open and see if the snake will leave on its own. This is only practical if the room the snake is in has a door to the outside or is connected to a room with such a door. You do not want the snake moving freely around the home. This will just give the snake a chance to hide under an appliance or piece of furniture. The other option you have is to close the snake into a single area and call a professional. There is no reason for you to attempt to handle removing the snake on your own. A rattlesnake bite can be deadly, and contrary to what the movies have you believing, not all bites are preceded by a rattling sound and a coiled position. When you hear about people getting bitten by venomous snakes, it is usually because they are trying to handle or kill the animal. You should do neither. Wait for a professional to arrive. If you are lucky enough to have a glue trap for snakes, you can try to close the trap into the room as long as it does not put you at risk. This will most likely be futile as the snake will be intent on getting outside and will not easily fall for the scent lures in the trap.

Age of diamond back rattlesnake - There is no way to definitively tell the age of a rattlesnake, though you can make an educated guess by the number of segments on the animals rattle. Each time a snake sheds, which, for the rattlesnake is usually annually, a new segment is added on to the rattle. The reason you cannot go by this as a fail-proof method of aging a snake is because the rattles are prone to breakage. If you see a snake with four segments on the rattle, that manes the snake is at least four years old but could be seven, eight, or twenty years old. An expert will be able to tell by examining the snake what a narrower age range might be. The condition of the teeth, the size and weight of the body, and the condition of the animals eyesight are all things that can indicate age. By adding all these variables together, a reasonable assessment can be made. Rattlesnakes can live to be twenty years old, though there is a high mortality rate due to predation for young snakes.

This species of snake is broadly split into the eastern and the western varieties of the Diamondback Rattlesnake, which roughly describes their distribution in the southern states of the United States, while both species are also found in Mexico. Together these rattlesnakes are responsible for many of the fatalities from snakebites that happen in the country every year.

These snakes are usually between three and five feet in length, and have the distinctive rattle which can be seen at the tip of the tail, which is vibrated to create the rattle warning sound. The scales usually have dark diamonds which are surrounded by narrow bands of lighter scales, which make these quite distinctive species that are quite easy to identify.

These rattlesnakes are members of the pit viper family, meaning they have a small pit near the nostrils which can be used to detect heat signatures, which the snakes will use when they are hunting. The Eastern Diamondback is slightly larger, but these are the heaviest varieties of rattlesnakes found in the United States, although very few actually weigh over twelve pounds.

Females will usually give birth to between seven and twenty one live babies at a time, although they are left to survive by themselves just a couple of hours after birth. The diamondback rattlesnakes will commonly live for between ten and twenty years, although many that come into contact with people are killed.

The Diamondback Rattlesnake prefers to have a wooded habitat which provides plenty of ground cover, and gives it leaves and other material to burrow into. They have also been known to take the burrows of gophers and tortoises during the winter.

The snake is a hunter that will bite its prey, and then follow as the venom carries out its work. It will eat a variety of small mammals found within its habitat, and this can commonly include rabbits, mice and birds, although anything it encounters can become prey.

Depending on their location these rattlesnakes have been known to be strong swimmers in the water, while smaller snakes in the species can also climb into bushes hunting their prey. The rattle is usually a warning, and can sometimes be heard even when you get within thirty feet of the snake, but if surprised they can also strike without warning, which is what usually tends to lead to some of the snake bite fatalities caused by the species.