The top ten snake killers, in order, are: 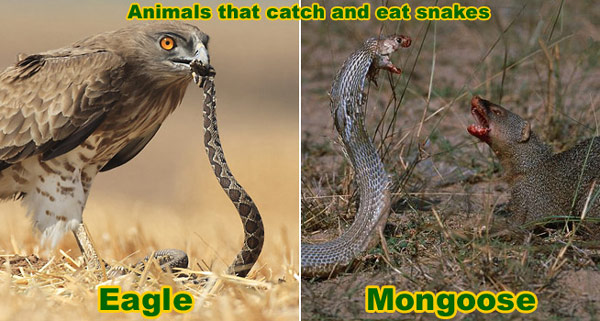 Actually, a whole bunch of different animal species kill snakes, including a ton of birds - owls, hawks, falcons, herons, etc. And many, many snake species eat only other snakes. So mostly, birds and other snakes are the most common predators of snakes. But plenty of mammals get in on the action too. Of course, humans are the biggest killers of snakes, but I won't get preachy.

Snakes around your home are just a part of life. Mankind has chosen to live in rural areas and must accept the occasional encroachment of nature from time to time. In The United States, there are no animals you can legally own that will patrol your property constantly for invaders of the serpent orientation, though there are animals that like snakes for a meal or kill snakes out of an instinct to protect themselves and others. Regardless, keeping up with your home and yard are still the best ways to keep snakes at bay; no pet is going to do it for you.

If you lived in Africa, Asia, or Europe, you would be a bit luckier when faced with snake issues and might be able to own a mongoose. The mongoose is a remarkable creature. Not only is it easily domesticated and friendly to boot, it has a natural affinity for killing snakes. Snakes are on the menu for the mongoose, though this weasel-like animal will eat a variety of pest animals such as rodents, insects, worms, and lizards. Due to specialized acetylcholine receptors within the body, the mongoose is immune to the effects of snake venom. This ability, coupled with a thick coat of fur, makes it a formidable fighter when pitted against a deadly serpent. Due to their indiscriminate diet, however, this critter is not allowed to be imported into countries where it’s not native. Serious ecosystem damage occurred in the West Indies when the mongoose was introduced to control snakes and rodents but did irreversible damage to local wildlife instead.

The same region of the world also has the talents of the honey badger, a carnivore that is immune to cobra venom and kills snakes by crushing their heads with its powerful jaws. This animal is fearless, and has been known to chase away young lions from their kill. Few things can penetrate the skin of the honey badger, and this helps it in the quest to find and eat snakes. Only adding to its reputation is the tendency to dig up human corpses and eat the remains.

Because we don’t have a natural-born snake killer like the mongoose or honey badger in North America, there is little recourse when you go to the pet store looking for an animal to fight snakes. Cats and dogs will occasionally tackle a nonvenomous snake; however, the last thing you want is your best friend out in the yard doing battle with a deadly viper. The Scottish terrier is one breed of dog that is adept at hunting down snakes, though, again, it has no immunity to venom. This breed was created for the purpose of hunting rodents and snakes, something that is now instinctually ingrained into its behavior.

Nature does have a way of controlling snakes; they certainly are not at the top of the food chain. One of the natural predators of venomous and nonvenomous snakes is the hedgehog. You wouldn’t think this docile, appealing animal could take on a deadly snake, but it’s true. The hedgehog has a fantastic defense against almost any attack. Pointed spikes all over the body make biting this tiny creature most unpleasant. Because a snake strikes quickly and without a premeditated destination, the serpent encounters a mouthful of spikes. When the hedgehog thinks the snake has been debilitated enough, it will clamber on top of the reptile and bite through its vertebrae. A natural resistance to venom helps the hedgehog survive numerous snake strikes; however, it is not immune to venom like the mongoose.

Birds are also big fans of snake meat, and an owl, hawk, or secretary bird has no issue picking up a snake and either crushing it with their talons or dropping the snake from a ridiculous height to kill it. Snakes are very wary of birds, part of the reason why serpents are so reluctant to slither through wide, open spaces like a mowed lawn. (Snake prevention tip: Keep your grass short!) If the birds don’t get the snake, there’s a good chance that another snake might just do the job instead. Snakes are their own predators, and if one serpent is larger than the other, the smaller reptile might become dinner. The king snake is one of the most feared cannibals of the snake world. This snake’s primary food is other snakes, and even though it is not venomous, it has no problem taking on rattlesnakes. Unfortunately for the rattlesnake, king snakes are immune to the rattler’s venom. Cobras are another serpent known to be cannibalistic. The cobra’s given name in science actually means ‘snake eater’. Other wild animals that can best a venomous snake are the bobcat and the wolverine. Both of these predators have thick coats and agile reflexes, making them good adversaries for a snake. Worst case scenario, if the birds, badgers, bobcats, wolverines, and other snakes aren’t successful, the timid armadillo might just do the trick. While armadillos do not make it a habit to eat snakes, they have been known to throw themselves at serpents, using their armor to cut snakes down.

Even domestic animals have their fair share of snake-killing abilities. Hooved animals are naturally fearful of snakes, especially horses, cows, and pigs. For an animal that grazes, four operational legs are vital to survival. Even though we have domesticated these creatures, the instinctual need to protect their legs will never go away. In the wild, a horse that received a snake bite would not be able to keep up with the herd and would be easy prey for wolves and other predators. For this reason, grazers will ruthlessly stomp a snake to death if one is in the area. The snake might be lucky, and the horse or cow might just run away; however, if the animal is the herd leader then the snake is as good as dead. While proficient at snake killing, hooved animals aren’t the only domesticated critters that are good at this type of job. Chickens and game fowl, especially turkeys, are diligent snake fighters. These birds like to eat snakes, and if it the serpent is small enough, they will gobble it down. This doesn’t mean that a fair share of birds won’t die from snake bites. Chickens have no immunity to snake venom, though their feathers might provide a natural insulation against puncture wounds from fangs.

As you can see, there are many animals out there that have a good grasp of what it means to kill a snake. Most of them aren’t your average house pet, and even if you could have a hedgehog running around outside, the chances that it would keep every snake out of your yard are slim. Snake control begins with proper yard and home repair. Eliminate what the snakes like and you will eliminate the snakes.

Click here for my nationwide list of 100's of professional snake trappers serving all 50 states. Here are some other snake links:
How To Trap Snakes
What Animals Kill Snakes
Color Rhyme for Coral Snakes
How Can You Tell if a Snake is Poisonous
How to Kill Snakes
Snakebite Aftercare
Snake Safety Tips
How to Catch Snakes
How Do You Keep Snakes Away
Do Mothballs Keep Away Snakes
Eastern Coral Snake
Eastern Diamondback Rattlesnake
Snakes in the Attic
Photographs of Snake Poop

Which Animals Catch and Kill Snakes

There are many people who are absolutely petrified of snakes, whether they be venomous of the small garden variety snakes that many people will encounter in many of the warmer parts of the country. Despite the fear of what snakes can do, they are not at the top of the food chain, and there are many animal species that will actually catch and kill snakes. Naturally, smaller non-venomous species are more vulnerable to being prey themselves, but even larger snake species can find other animals above them in the foot chain.

Because of their ability to spot snakes from the air, there are several bird species that can catch and kill snakes, which are particularly vulnerable when they are basking in an open spot in the sun. There are several species of eagle that prey on different types of snakes, and the snake eagle is actually named for that reason. In Africa, the Secretary Bird can also hunt snakes, although they are more likely to attack when they disturb the snakes walking through grass, as they do not fly as much as other bird species.

These mammals are known for their ability to catch and kill snakes, and there are many so-called snake charmers in India and other Asian countries that train their mongoose to be able to kill venomous snakes. The mongoose doesn't generally eat snakes however, so this is more likely to have been a reaction to being prey for the snakes that evolved as a defense mechanism to protect them from snakes.

Many people who have snakes in their yard or garden would love to be able to buy a domesticated animal that would naturally prey on snakes in the same way that cats prey on mice. However, while it is possible to train some terriers to catch and kill snakes, this is a lot of work and isn't a natural reaction, while there are also many restrictions about hunting with dogs which may make this illegal in many areas.

Can A Hedgehog Really Kill Snakes?

Yes, those prickly, slow-moving and ultimately quite cute little animals. A snake will naturally try to bite anything that it thinks it may be able to eat, but the prickly exterior of the hedgehog can prove to be a difficult adversary. The snake will not back off, and repeatedly pierce itself on the spines of the hedgehog, and when it is sufficiently weak, the hedgehog will actually respond, and bite through the snake's vertebra to kill it.