Need gopher removal in your hometown? We service over 500 USA locations! Click here to hire us in your town and check prices - updated for year 2020. 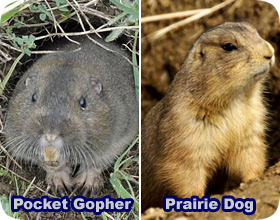 Gophers are usually classified as a pest species due to their tunneling habits. They form large colonies, and a large network of underground tunnels. The most common complaints include the following:

For these reasons, many people wish to have nuisance gopher trapped and removed.

It's not possible to trap gophers with humane live cage traps, at least not that I know of. These elusive animals burrow underground, and they can't be easily trapped in live cages, and even then, it's not really possible to relocate the animals, because they need to live in a colony, in an established network of underground tunnels.

The only real gopher trapping method is to set special lethal traps down in the tunnels. These traps are a type of body grip trap that snaps shut on the gopher and kills it on contact.

The way you set these traps is that you find established tunnel routes underground. You can see the tunnel paths via the dirt mounds, and use a probe stick. You dig up the earth exposing the tunnel, then set the traps inside. Usually multiple traps, coming and going. These traps are tricky to set for amateurs. You then carefully bury the trap with dirt over top. Some guys put a barrier over the traps to prevent dirt from clogging them, but you can also simply set the traps in a tunnel area that is structurally sound. Mark the trap locations with one of those little garden flags.

To check the traps, you come back later and dig 'em up! Best to wait a few days before bothering to check.

A good trapping program will use lots of traps, set in the most popular gopher runways, and continue for a period of time until all the gophers are trapped and removed. 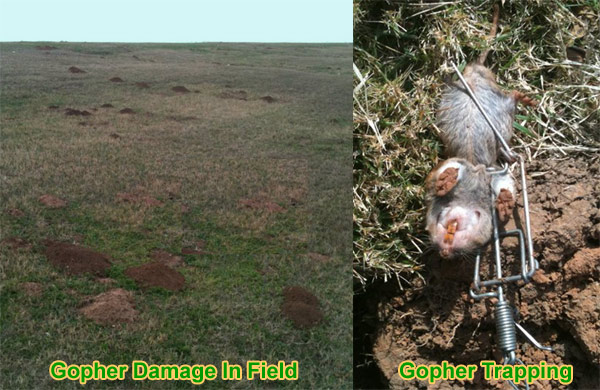 You may like to keep a gopher around to check his shadow as winter comes to a close, but most people prefer that Punxsutawney Phil stay far away from their home and garden. Gophers, a large, burrowing rodent, are found everywhere in the country, and there are over one hundred different subspecies of the little critters. While the occasional field hole doesn’t seem like it would evolve into a problem, there are some major concerns when gophers take up residence.

Gophers like to burrow. These burrows can appear in any yard or garden, and are usually characterized by a large mound of soil surrounding the hole. One gopher hole will usually mean many more. Living in communities, these large rodents create a series of interconnecting tunnels with multiple entrance and exit portals. Guard gophers will visually patrol the vicinity around a gopher city from the safety of an entrance hole. If an intruder is spotted, an alert is sounded, and all the gophers vanish into their network of burrows underfoot. Due to the inclination to hibernate, many gopher issues seem like they resolve in late autumn, only to rekindle during the spring mating season.

If you have horses, cows, or other large animals that require all four legs to survive, you will be concerned about gophers. Horses and other grazers cannot spend long periods of time lying down or their health will be compromised. Large, commercially bred animals often have bodies abnormally large for their species. A broken leg to one of these animals will mean euthanasia. The body mass will crush internal organs if a large grazer lies down for too long of a time. It is wise for farmers to be wary of gopher holes in their fields.

The idea of a household gopher is less ominous, though people can step in gopher holes and injure themselves as well. Gophers that live in close proximity to people tend to be nuisances due to the holes in otherwise pristine lawns or gardens. Occasionally, gophers will become so engrossed in digging and chewing that they will lacerate buried cables near houses.

There are many home remedies for discouraging gophers from living on your property. Moth balls are almost always tried by desperate home owners but to no avail. A gopher can simply cover over a pile of moth balls or use another existing tunnel to avoid them. The same logic applies to plugging gopher holes. Since the gophers dug the holes originally, it stands to reason that the gophers can tunnel out if trapped underground.

The only real way to accomplish gopher removal is through trapping. Live-traps, used to relocate gophers, are a humane and reliable method for gopher elimination. Lethal body-clamping traps are also widely used. Trapping these animals is most effective during fall and spring. By locating the commonly used tunnel in the gopher network, a trap tunnel may be dug down and the trap placed inside. Traps should be monitored daily.

Some experts recommend the rotation of season crops to help eliminate gopher issues. Corn, for example, will often provide a substantial enough root system to feed a large rodent all year long. Most grain crops do not offer significant root systems, thus preventing any volume of food from being obtained off them.

You can trap a gopher yourself; however, you are very rarely dealing with just one gopher. It is always wise to leave handling a gopher community to the professionals. Time and experience are huge factors in the successful removal of gophers from a property. Why waste valuable time and energy? Call a professional.

Go back to my main gopher removal page, and you can read more about prairie dog removal here.

You can also read about marmot removal if that's the burrowing animal in your region.