How To Get Groundhogs Out Of Your Garden

Need groundhog removal in your hometown? We service over 500 USA locations! Click here to hire us in your town and check prices - updated for year 2020.

The short answer is that you've got to either build a really good fence around the garden, or trap and remove the groundhogs. Read here for groundhog trapping tips or if you can't do it yourself, click here for my nationwide list of 542 pro groundhog trappers serving all 50 states. 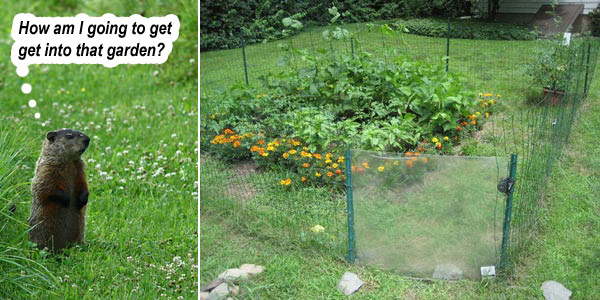 How To Get Groundhogs Out Of Your Garden

Groundhogs can be a massive pest to gardeners and homeowners, and if they are allowed to remain in the garden unchecked they can quickly turn a beautifully manicured garden into a mass of freshly dug earth. This is why it is important for those who do find a groundhog burrowing in their garden to act quickly, and to get them out as soon as possible. Groundhogs will not generally appear in large numbers, but they can be problematic because of the amount of plants they will eat and damage in a short time in your garden.

First Steps If You Find Signs Of A Groundhog Burrow

If you do find a burrow in your garden, it will usually be in the spring, as the groundhog is an animal that will have a separate winter burrow which they will dig in a wooded area or somewhere with plenty of shrubbery. It is worth noting that a groundhog will be particularly defensive about its burrow, so it is best to try and trap the groundhog rather than actually damaging the burrow. Groundhogs, or woodchucks as they are known in some areas are large rodents which have large teeth, so it is best not to try and force a confrontation. Read more about Why Groundhogs Dig and Problems Caused by Groundhogs Digging.

For those who are inexperienced or nervous about dealing with pest animals that may carry diseases, they may want to get in a professional wildlife control expert, as they can be quite a tricky problem to solve. They spend an awful lot of their time below ground, but spend just enough time above ground to be a massive problem to those who are proud of their garden and spend time tending it. Read more about Do Pest Control Companies Remove Groundhog? and What Wildlife Rehabilitators Do With Groundhogs.

Trapping And Getting Rid Of Groundhogs From The Garden

There are many different solutions that have been found to try and solve the groundhog problem, but many of these are simply too large or too expensive to be worthwhile in a domestic garden. Gas canisters thrown into a burrow that is then quickly sealed will usually kill the groundhog if it is there, but it can take a lot of work to seal all the exits, and still doesn’t deliver guaranteed success. Hunting is also a possibility, but this can require a long time of observing the burrow before the groundhog emerges.

You can use both live cage traps and lethal traps to catch groundhogs, and it is vital for both types of traps to be well placed near the entrances to the burrow. There are many different types of fruit and vegetables that can be used as bait such as sweet corn and peaches, but the most successful bait is usually cantaloupe. This should be placed in the trap to ensure the groundhog has to go all the way in, and rubbing a trail of cantaloupe from the burrow entrance will further increase the chances of success.

For those using a live trap, there may be legal issues to consider when it comes to releasing the animal, as laws vary from state to state. People living in states without specific regulations should release the animal at least ten miles away from their property, and well away from any other domestic gardens or agricultural land. Read the guide Can You Use a High Pitch Sound Deterrent Machine Against Groundhogs? and Equipment You Need to Trap a Groundhog. Or read about The Groundhog's Reproduction Cycle and Mating Habits.

Some people will be happy to deal with groundhogs as they appear, but others may want to be more proactive. An exclusion fence that goes at least a foot into the ground is certainly a wise investment for those who have a regular problem with groundhog infestations. Read more about how to keep groundhogs away.

If this doesn’t work, placing a ring of two electrified wires outside the exclusion fence will often be the most successful, although it will take some investment in order to get such a barrier in place.

An no, if you want to kill a groundhog there is no effective poison that'll do it. Read the guide Ways to Kill a Groundhog. Only lethal traps will work. Groundhogs are also called woodchucks. Read about Woodchuck Biology Information. Go back to the main groundhog removal page.