Need groundhog removal in your hometown? We service over 500 USA locations! Click here to hire us in your town and check prices - updated for year 2021. 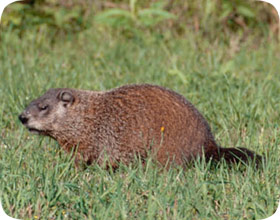 Groundhogs are usually classified as a pest species due to their habits of digging and eating crops. The most common complaints include the following:

For these reasons, many people wish to have this nuisance animal trapped and removed. They can be trapped in live cage traps, or special lethal traps mounted right on the burrow entrance. Read the guide About Groundhogs.

GROUNDHOG BIOLOGY: Groundhogs (Marmota monax) are rodents, and adults average 8-10 pounds. They give birth in spring to 3-6 young. They can live up to six years in the wild. They are primarily herbivorous, eating a wide variety of plants.

GROUNDHOG BEHAVIOR: Groundhogs are diggers. They excavate tunnels and burrows underground, in which they live and raise young. The tunnel may have up to five entrances and 50 feet of total tunnel distance. They create a den to live in, and to hibernate in. They are primarily active during the daytime. They can climb and swim, but they mostly stay in fields, foraging. When they sense danger, they retreat for the tunnel. Woodchucks can create a wide variety of vocal noises. They grow fat during the summer, lethargic by autumn, and in winter, they hibernate. They emerge in spring and start the mating process. Read about The Groundhog's Reproduction Cycle and Mating Habits.

NUISANCE CONCERNS: Woodchucks are considered agricultural pests, since they love to eat a wide variety of crops. Learn how to get rid of a groundhog in the garden. However, their burrowing habits often cause a bigger problem. Horses can break their legs by stepping into burrows, and when a groundhog digs under a house or deck, the removal of soil can undermine the foundation. Click here to learn how to get a groundhog out from under a shed or deck.

GROUNDHOG DISEASES: No important diseases associated with groundhogs. Read the guides How To Tell if an Active Groundhog is Rabid, Diseases Groundhogs Carry and Symptoms of A Sick Groundhog.

HOW DO I GET RID OF GROUNDHOGS? The best method is trapping and removal. If you simply block off their holes, they will dig them out again. They can't be poisoned. They can be live trapped in cage traps or caught in lethal body grip traps. Read more in my groundhog trapping tips page or read the guide What to Do With Groundhogs After Catching Them.

CAN'T I JUST USE A REPELLENT? Many people try various repellents to get rid of groundhogs - everything from mothballs to fox or coyote urine. However, none of these are effective. The only sure means of woodchuck control is trapping and removal. Read the guide Can You Use Ammonia or Mothballs to Repel Groundhogs? and Equipment You Need to Trap a Groundhog.

Woodchuck (Groundhog) Information Marmota Monax is what the groundhog or woodchuck is known as in the scientific world. This mammal is part of the Sciuridae family or rodents and is considered the largest of the family members within its North American habitat.

Biology These mammals are herbivores so dine on grasses and other vegetation, including berries and items found in peoples gardens. They will also eat insects including grubs, snails and beetles. They are also sometimes known to eat small mammals but this is a more uncommon occurrence than with other mammals of their family group. They tend to enjoy eating some nuts but dont hide their foods in caches like other animals do. They often weigh around six or eight pounds when full grown. These guys are for the most part diurnal which means they are awake during the day and that they sleep mostly at night.

Life Cycle And Reproduction In the wild a groundhog will generally live to be about six years old while in captivity some are known to live up to twenty. They are slower to become sexual active than others in the rodent group, generally waiting till their second year to mature. These mammals do hibernate and when they wake in March or April they are ready to enter the breeding season. The female is pregnant for about 31 days during which time the male stays with her in the den they create together. Right around time to birth the male leaves and the female will deliver anywhere from 2-6 young. The babies nurse for about six weeks before moving out to find their own den. Read the guide Are Groundhogs Good Pets?

Habitat Groundhogs tend to enjoy living in open spaces where they have a lot of access to vegetation and other food staples. They like to find soft ground that lends itself well to their building dens and burrows. A groundhogs tunnel can have five or more entrances and exits so that more than one groundhog may use it as an escape. These mammals have been known to shuffle up a tree to check out their surroundings or to take a quick swim when needed but generally prefer living in open areas where it is easy for them to forage and find veggies to feed on. Read the guide What is the Groundhog's Natural Habitat?

Groundhogs are major diggers and have been known to create tunnels that have up to fifty feet of tunnel spacing. They use their burrows for everything from hibernating to rearing their families. In the process of their creating these dens they have been found to move more than 700 pounds of dirt. Because of the large amount of digging and burrowing these mammals do, they can cause a fair amount of property destruction and even damage to foundations of buildings when they dig too close to structures. Read more about Why Groundhogs Dig and Problems Caused by Groundhogs Digging.

Common Diseases These Animals Can Spread There are no known diseases these animals readily pass along to humans living nearby. Like all wild animals they can be a carrier of many different parasites including worms, fleas and ticks. All of which can infest any domestic animals a person has near woodchuck homes.

Common Nuisance Complaints These mammals need to eat a lot of vegetation and as such most gardens are prone to having a groundhog attempt to move in. These extra-large rodents also build big burrows or dens to live in and it is not unusual for their burrows to cause disruption when built near the foundation of a home or out building. Additionally, if accidently cornered these mammals can be quite fierce, attempting to attack rather than flee. Moreover they create holes and tunnels compromising the ground in such a manner that horses can get a leg stuck and broken, as well as other animals or children who dont notice the holes before stepping into them. Read the guide What to Do If You Find a Nest of Baby Groundhogs.

In case you're wondering, there is no such thing as an effective groundhog poison to kill these animals. Read the guides Should You Ever Poison A Groundhog? and Does the City Or County Animal Services Department Help With A Groundhog Issues?

Groundhog Email From Reader: Ron Smith at the extension service, suggested that I check out your website because I asked him about groundhogs and he, of course, is a plant man! Unfortunately, I live in Indiana, but have these groundhogs that have dug holes under my hottub! In the past I have used a live trap and caught many woodland creatures (I live right by a park with a creek). This summer, it seems the groundhogs aren't interested in my trap. I've used fruit, veggies. I've plugged the holes, tried mothballs, but neither of those little things worked! I'm wondering how deep they dig, if I tried to put a barrier down into the ground around my hot tub. OR, will they just go as deep as they need to? Do you have any suggestions? The hot tub is sunk in my deck, so there's not a lot of space for humans under there. Plenty of room for groundhogs to set up housekeeping! I think they have a lovely palace and have sent the word out to all their friends to come and party! Any help/suggestions you have would be greatly appreciated! Thanks so much. Bea

My Response: If you want to install a steel barrier into the ground, it only needs to be a foot deep, but curve the bottom of the steel screen outward about six inches. That way, when the animal digs down, it will hit this curve, and it won't know enough to move backward to try to dig underneath it.

Groundhog Email From Reader: hi. you helped us enormously a month or so w/ some groundhogs under our deck here in Tallmadge. you gave us the # of someone who does lattice work WITH the heavy screen in back of it to prevent this from happening again. I lost that #--could you please resend? thanks much. Delese

My Response: Oops, I think you meant to email a wildlife trapper from my directory, in your area. I'm just the guy who created this website, and I trap animals in Orlando FL.

Groundhog Email From Reader: Just wanted to pass along another groundhog story for you. My husband and I were living in the Philadelphia area and our backyard sloped down to some open space with woods and a small creek running through it. We had a small wood deck with a wood railing on the back of our house and kept our gas barbecue grill out there, covered for winter. Well, early one spring we happened to step out on the deck and smelled gas -- come to find out a groundhog had decided that our deck and deck railing were perfect for gnawing his teeth -- he just got carried away and gnawed right through the hose from our propane tank. Good thing we weren't smokers or the whole place could have gone up with a bang! We had a wildlife trapper come out to help us, but that wily groundhog refused to be trapped. Every once in awhile I spotted him waddling down to the woods, but he never came back to our deck again.

My Response: Wow, thanks for the story! These critters can cause some real damage sometimes.