How to Kill a Raccoon

You can use a lethal body-grip trap that will snap its neck, or you can shoot it. NEVER EVER attempt to poison a raccoon - I know from experience that it either won't work, or you'll wind up with bigger problems on your hands.

If you've caught the animal in a cage trap and want to euthanize it, a CO2 chamber is best. Since you probably don't own one, shoot it. Please do not drown the animal - that's a cruel redneck move.

It's usually easier to trap a raccoon in a cage than outright kill it. Read my raccoon trapping tips to find out how to catch it.

Also, if the raccoon(s) are in your attic, then you must use special methods. Merely killing it won't work. Read my raccoons in the attic guide for more info. 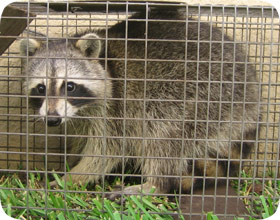 For these reasons, many people want to kill a raccoon. I understand. But please consider the situation, and realize that in almost all cases, it's a lot easier to either exclude the animal, or to catch it in a live cage trap and relocate it.

If a raccoon is definitely sick, such as with rabies, it will die soon, but if you want to mitigate a health risk, it may be a good idea to kill the animal. But remember: A raccoon outside during the daytime does NOT have rabies. It is very common for raccoons to forage and be active during the day. A rabid raccoon will be very sick, with partially or fully paralyzed hind legs, moving in repeated circles, etc. If the animal is moving normally, or just sleeping, it's healthy.

How to Kill a Raccoon - Raccoon is a mammal of medium size found in the Northern parts of the United States. They not only cause extensive damage to the garden and vegetation but can also be a big threat to your house. They are known to damage the attics, air conditioning vents and other areas. They can also dig deep under the house damaging the entire structure. They are also carriers of a number of parasites which can cause diseases to humans. Here are a few methods that can be employed to kill a Raccoon.

Shooting
This is probably one of the easiest, most convenient and sure shot methods of killing a Raccoon. You would not find any difficulty in hitting the target because of their decent body size. Just point the gun when they are steady and shoot. The only thing that you need to consider is the legal issues related to the use of gun for killing of mammals in your area.

Grip Traps
Grip traps are lethal and can kill the Raccoon in a matter of seconds. You can easily find one in the local market. They have a trigger and jaws. Once the Raccoon steps on the trigger, the jaws move and catch it from around the neck and spine area. The mammal is killed instantly due to the extreme pressure and snapping of spine. However, experience is certainly necessary to install the trap in correct manner. Else, you might never be able to catch and kill the mammal. You need to install the same in front of its den or observe the pattern of its movement to place in the right path. It is very important that Raccoon step on the trigger. You might also need to block a few paths or entry and exit points to restrict their moment and force them to move in the direction where trap is placed.

Drowning
Killing Raccoons by drowning is another method that is being used by many; however, it is certainly an inhumane one and must be avoided as much as possible. Raccoon is caught using the trap cage, which is then kept submerged in water in a lake, pool, or other similar place until the mammal dies. There are also specially designed cages with a small water tank beneath. The lower portion of the cage opens up as soon as the Raccoon steps onto it and dies by drowning. A more human method using the same technique is by replacing the water by carbon dioxide or by using a lethal injection for the purpose.

Poison
There are a number of different options of poison available in the market that can kill Raccoon. These include
• Anticoagulant: This is a rodenticide that is used to kill rats and mice. It is known to cause internal bleeding or hemorrhaging and damage to the capillaries. There is extreme pain and Raccoon dies in a few days.
• Antifreeze: It causes excessive tissue and cellular damage. Nausea and vomiting is caused in the initial stages and is followed by kidney, liver and heart failure. The entire process takes about 24 hours.
• Strychnine: It can cause death due to extreme exhaustion.

Other poisons that can kill raccoons include Bromethalin and Cholecalciferol to name a few. Poison is certainly one of the worst methods used to kill Raccoons. It must be avoided as much as possible. The important thing to note here is that use of poison is illegal in most states. Also, you can never be sure if the poison consumed is enough to kill the mammal in short period of time. There are chances that it dies in an isolated or hidden place in your home and you are left with a decaying body with a lot of bad smell. The poison might also be consumed by another animal resulting in its death. This includes your own pet animal as well. The best way to get rid of Raccoons is to catch using the cage traps and free them at far off places. You can also use a number of different techniques to keep them away from your house. This includes making the garbage can Raccoon proof and removing sources of food that are easily accessible to them.

Knifes or Swords
If shooting is not legal, you can always use a knife of sword. Remember to kill quickly so that the animal does not suffer from a lot of pain. Also, you need to be really quick while using the method. Raccoons can also fight back and hurt you although the chances for the same are very minute.