Surprisingly often, I deal with the problem of raccoons causing problems in swimming pools. Raccoons love water, and they are drawn to lakes and streams. In fact, the raccoon's latin name, Procyon lotor means "washes with hands" - these animals were so named because they so sometimes wash their hands, and even their food, in water. Cute! But where raccoons live and eat, they poop. And like a lot of animals, they like to hide their feces (like a cat pooping in the sand), and so they like to poop in water. If you have a swimming pool in the home range of a raccoon, it will likely use your pool as a toilet. This is all the more common if you have some shallow steps leading down into the pool. "Help! A raccoon is defecating on the steps of my pool!" I've heard many a distressed homeowner give me that line. 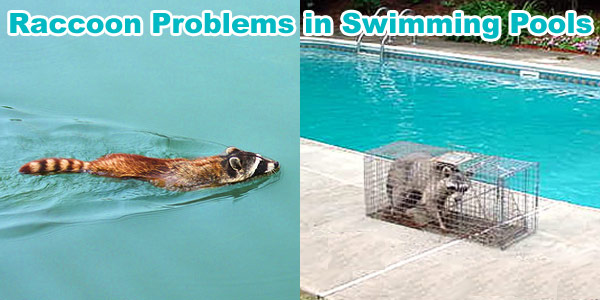 So how do you solve a problem with raccoons in your swimming pool? The best way is often to trap and remove and relocate the animal, so that it no longer has access to your pool in its home range. Raccoons are very crafty and resourceful, and they are also very brazen with people, so tactics that attempt to deter them or scare them off don't usually work.

If you do trap the offending raccoon, please be kind. Raccoons are very intelligent and even emotional animals (it's true!) so it would be nice to drive the animal to an area far away, at least ten miles, and release it. In the below photo, we see an unfortunate case in which a homeowner, in an attempt at poetic justice, drowned the raccoon in the very pool it was using as its latrine. Death by drowning is horrible, so please don't do it.

UPDATE: I had an inquiry about the below photo, and I wrote above that the homeowner had drowned it, because I wanted to make a point that drowning is bad, but the embarrassing truth in this case is that I set the trap right at the edge of the pool, and the raccoon must have either reached out and pulled the trap over, or rolled it, which happens sometimes with trapped raccoons, and it went into the pool. At least that's my theory, because the homeowners said they didn't do it, and they were upset, and I felt very bad about it all. So, lesson learned on my end. Never set a trap too close to the edge of the pool. But the original point still stands: drowning is cruel, either intentional or not, so don't do it on purpose or by accident. If you have permission in your state to relocate the animal on approved land, do so, or euthanize (kill) the animal humanely, with a firearm, shock stick, lethal injection, or CO2 chamber. 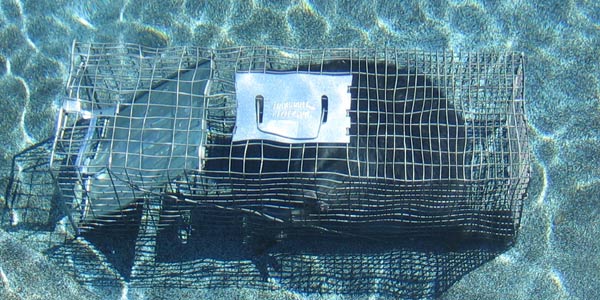 We now service over 500 locations! Click here to hire us for raccoon removal in your town.

How to Stop Raccoon Poop in the Swimming Pool - It's all very good and well wanting to live harmoniously with nature and the wildlife around you, but once one of those natural interlopers starts pooping in the pool, the situation changes a little bit. See my raccoon poop photos to identify the feces before you proceed.

Firstly, don't get in the pool.
Secondly, make sure no one else gets in the pool either.
Thirdly, your pool and, therefore, your land or garden is not as safe as you thought it was.

Raccoons are one of the most common culprits when it comes to animal feces in the pool although they're not the first animal that many homeowners would point the finger at. The problem with raccoon poop, also known as scat, is that it doesn't look like anything out of the ordinary. It actually looks like the poop left behind by pretty much every house cat on the block. Oh, and some dogs too; usually, small to medium-sized ones. You wouldn't believe how many times we've been called out to a property where homeowners have believed a domesticated animal has done their business in the swimming pool, and it has actually been a rogue raccoon. They're not the only culprits either; skunks, opossums, foxes, and even rats and mice will poop in your pool if they are granted access.

The Problem With Poop

As well as being absolutely disgusting, entirely unhygienic, and really not the kind of thing you'd want to find when preparing for a nice dip, raccoon scat is literally riddled with diseases that CAN and WILL contaminate the water. This is then introduced into your body by way of accidental swallowing, through cuts in the skin, getting in the eyes, nose, or mouth, and more. We're talking about some potentially fatal diseases, alongside a couple that you might not even be aware that you have.

Poop from ANY animal is going to clog up the filter in the pool. This can cause malfunctioning pool equipment and potentially very costly repair and maintenance work.

How to Stop Raccoon Poop in the Pool

Ideally, you're going to want to stop that raccoon (as well as future raccoons and other wild animals) from entering your property at all. By doing that, it is unlikely that they will make it as far as your pool.

Step one: remove all food sources. This will stop the animal from being interested and encouraged to come closer by the smell. Raccoons are more likely to move on from an area if that area has nothing to offer them. What's the point in staying somewhere there isn't a lot of food or food is hard to come by when there are so many better places to explore and take advantage of.

Step two: consider erecting a fence. This might seem like a troublesome task if you have a very large area to try and protect, but fencing actually does work to deter nuisance wildlife. If the fence isn't easy to climb, is high enough, and can't easily be hopped over with the assistance of a few low-lying tree branches, you will find that raccoons and other critters won't find getting in such an easy task.

Of course, much like other wild animals, raccoons can dig pretty well. It is vital that you remember to protect your garden from both above and below ground. The fence works above, but you can add a secondary layer of fencing below ground too, using hardware cloth in a filled-in trench. If the animal were to burrow, it wouldn't be able to get very far before being met by that underground barrier.

Step three: have a good tidy up. In almost all cases, raccoons and other pest species will choose to hang out in a messy garden over a nice, clean garden that is filled with open space. The latter, with plenty of open space, doesn't offer the animal, raccoon or otherwise, anything in the form of protection. Running across an open patch of land is dangerous, putting the animal at risk from being seen by people, chased down by hunting predators, or give the game away if it is trying to find something alive to eat.

The messier your garden is, the more hiding spots these wild animals will find. And, more often than not, more food sources too.

Step four: add a pool cover. This isn't always the best or most cost-effective solution, but if you have a cover over the pool, the raccoon won't be able to get to the water at all, let alone poop in it. Read more about how to keep raccoons away.

If you can't cover the entire pool, at least try to make the steps or shallow end as unreachable as you can. Raccoons regularly use the shallow end as their public bathroom, so by making this specific area difficult to get to, you do increase your chances of preventing poop-related problems.

As a final note, you could also consider using striped strips to keep raccoons away from your pool and other areas, although, you should not be surprised if the raccoon still manages to find its way around the obstacle. Go back to the Raccoon Removal page, or learn tips to do it yourself with my How to Get Rid of Raccoons guide.

AN EMAIL SENT TO ME:

Hi David, First of all, let me just say thank you for all of the helpful information you have placed on your website. I will try to be brief in explaining my situation and maybe you can help me from there. I’m just looking for a little guidance before I proceed.

About three weeks ago my pool maintenance guy who comes once a week, told me there was some sort of animal defecating in the pool. There was so much feces accumulated in a matter of a week that by the time he came back the second week, it had clogged up my pool filter. I purchased the property approximately four years ago and I knew it could only mean one thing… raccoons. The stray cats never defecate in the pool or cause this much havoc. Around the same time, we noticed 2 of our soffit vents which were completely intact since we’ve been here, were now torn apart and broken. One of the soffits is located slightly over another part of the roof and the other is next to a palm tree and fence. We assume they only broke those 2 because there were the only 2 areas where they could sit rather comfortably while tearing apart the soffit vent. We then went ahead and cut most of the palm trees down in that area and replaced both soffit vents. The next day, one of the soffit vents was broken again.

Make a long story short, they have made a home in my attic and are living up there. I called animal removal services in my area and they want to charge me $450 dollars just to remove the animal. Of course, that is not including all that it is going to cost me to treat the feces and urine left up there and the possible replacement of the insulation. I can’t afford any of this at this time and I don’t know what to do.

Is there something you could recommend in a do-it-yourself kind of way? We have set up traps and they won’t get in. We suspect it’s a mother with baby raccoons. My neighbor says she saw them but that she won’t get in a trap she has set up either. My neighbors have cats and have put away the cat food and closed off their doggie doors. We have set up food for them with cat food, ham croquettes, tuna fish, coca cola with something else mixed in it, and the list goes on and they won’t bite any of the bait.

Please help. We are desperate and do not have the money to deal with this appropriately. Any guidance would be greatly appreciated. Thanks again.

Well, trapping and removal is usually the best option. But if you don't want them pooping in the pool, you could get some wooden plywood boards and pound dozens of long nails through, and make a spiked board and put that on the pool steps, and hope the raccoons won't go in the pool any more.  There's a good chance it won't work because raccoons are so smart and stubborn, but it's worth a try iof you can't afford to hire a professional company. But for goodness' sake, don't hurt yourself or anyone else with a board full of nails sticking up!