Do Daytime-Active Raccoons Have Rabies?

One of the biggest symptoms associated with the rabies virus is "rabid" behavior, which can sometimes involve a usually nocturnal animal coming out during the day, despite it's basic instincts otherwise telling it not to. 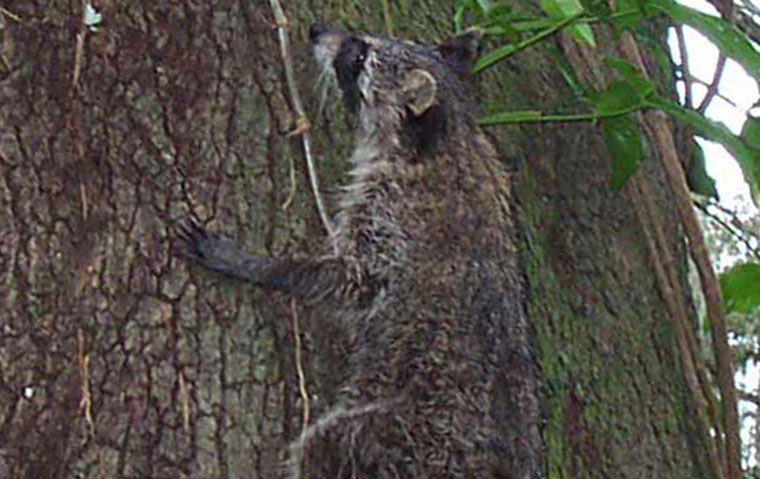 A raccoon that is rabid — infected with rabies — will likely come out during the day, but this is usually at a later stage of the infection. Rabies can be present in an animal that has no symptoms, or even symptoms that aren't associated with the viral disease at all. The virus can work its evil around the body for a number of days or weeks before any symptoms can start to show, and once those symptoms do start to show, there is no going back. Read about Do Raccoons Attack People? There is no cure for rabies in humans or animals AFTER symptoms have started. Pets must be vaccinated against the disease, a process that is required by law in some places. (You should check the state in which you live for more information.) Humans must receive treatment for rabies IMMEDIATELY -- within the first 24 hours is usually advised.

There is a possibility that a daytime-active raccoon will have rabies. Raccoons are one of the biggest vectors of the disease in North America, so it is wise to look at the animal with a certain degree of trepidation. This is most certainly the case when you're dealing with raccoons on your property. Removing that animal yourself could result in a bite that has the potential to leave you suffering with the rabies virus. Read about What To Do If You Are Bitten By A Raccoon.

Raccoon habits seem to have changed over recent years, with more and more of them becoming active during the day, when they would usually be asleep or hidden away in their dens and burrows. As the species has moved in alongside humans, a move forced by the deforestation of huge raccoon territories regularly, they have adapted a little in order to stay alive. Just one of the ways it has adapted or evolved is by becoming more alert and awake during the day. There is a lot more noise around in these urban hotspots, so the noise would probably be enough to wake them up from time to time. Many residences are entirely abandoned for the daytime, however, allowing these creatures all the time they need to have a good root through a garbage can or two. This would once have been something only noted during the night.

A raccoon that is daytime-active MIGHT have rabies, but just because it is out during the day, doesn't mean it definitely has the virus. There's a much higher chance the animal has just found a very good source of food and has decided to make good use of it. Wouldn't you do the same?

READER EMAIL: Hi David—I looked at your website and decided to write to see what you think about our raccoon issue. We live on a large, fenced lot in downtown Orlando. We’ve had raccoons around for years—especially when my husband was feeding some stray cats near the garage. We typically would see them at night and they didn’t really bother us. Then about a week ago, a pretty large raccoon started showing up in the backyard during the day (see picture). He/she hangs out on our soon-to-be back porch…then meanders off to the corner of the yard and digs like crazy. The weird part is that he comes right up to the sliding glass door, looks in the kitchen and completely ignores me and our two dogs (who are barking like crazy by this point). He’s been back every day for at least a week now. We are afraid to let the dogs out (they are both smaller than him) because we would hate to have them get into a fight, especially since everyone keeps saying that this is not normal behavior and the raccoon may be rabid or sick. So, I guess my question is, do you think we should have him removed? If so, can you come trap him for us? Thanks in advance for your help.