Sometimes in nature a dangerous, or venomous animal will develop a bright color pattern that tells other animals, "stay away"! Then sometimes other animals that aren't dangerous will evolve a similar color pattern that copies the dangerous animal - this is called Batesian Mimicry. A great example is found in coral snakes and the types of snakes that look like coral snakes. These look alike snakes copy the color pattern of coral snakes, the red yellow black bands around the body. However, if you look closely, you'll see that the colors aren't exactly the same. With the coral snake, red touches yellow. With the copycats, red touches black. Look at the below photographs, of the Scarlet Kingsnake and the Florida Scarlet Snake. You'll also notice that the copy snakes have light bellies, and a big difference is that the coral snake has a black nose and the lookalikes have a red snout. Learn more by reading my coral snake page, or my snake color poem page. 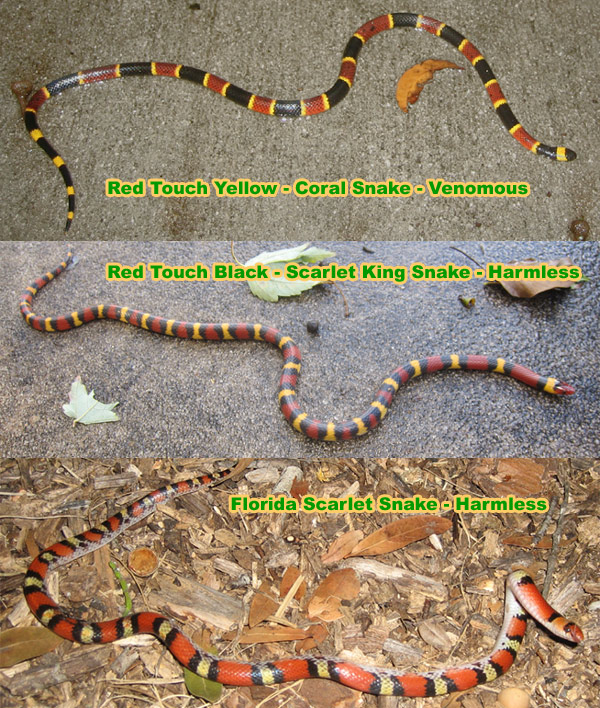 Coral snake rhyme to tell the look alike snakes from the real poisonous snake - Red touch yellow: kills a fellow. Red touch black: safe for Jack. This is just one variation of the snake rhyme created to identify the venomous and deadly coral snake. This rhyme is fairly reliable as long as you are in North America. Other countries around the world have coral snakes of different coloration, and the rhyme has no application to these animals. The stanzas are also geared to differentiate between the common shovel-nose snake and the coral snake. Both serpents are very similar in color; however, it is the sequence of bands that will indicate danger. Unfortunately, many shovel-nose snakes meet their ends because they are mistaken for a coral snake. Even though the coral snake’s venom is neurotoxic and deadly, there have been no reported deaths from it since the 1960’s. This is due to the effective antivenin that was developed during that decade. The coral snake, if it can be identified, should be left alone. It is not an aggressive snake and will seek no quarrel if you keep your space. Most bites happen when children attempt to pick the animal up because of its alluring coloration.

Coral snake look alike information - Coral snakes are the snakes responsible for the fun rhymes taught to children about red touching yellow and red touching black. Despite the simplicity of the songs, they do serve a definite purpose. Coral snakes are very similar in coloration to the harmless shovel-nose snake and Scarlet Kingsnake, not to mention a few other species, like the Pueblan Milk Snake or the Florida Scarlet Snake. While there is no harm in mistaking a nonvenomous snake for a dangerous one, trying to pick up a coral snake because of mistaken identity can be disastrous. Coral snakes are the odd-ball in the North American conglomerate of venomous snakes. The coral snake does not have a triangular head, slit-like pupils, heat-sensing pits, or venom sacks attached to its fangs. The only thing that identifies it as a poisonous snake is its color, which is a poor attribute to rely on when trying to identify a species. Thankfully, no deaths have been reported from coral snake bites since the 1960’s when an antivenin was created. These animals are not aggressive toward people; however, children are drawn to them because of their bright colors. The coral snake injects venom by latching on to a victim and maintaining hold. This allows the poison to seep in through the bite wound. Other vipers inject their venom through the sacks attached to their fangs.

Go back to my main snake removal page for more general snake information.