Easiest Way to Remove Raccoons from the Attic

The top two factors are usually what drives most animals, particularly wild ones, but raccoons are proving to be a very intelligent nuisance animal, one that has learned to use humans to their own advantage. Food, water, or shelter is what often brings these animals in to take a closer look at a property or patch of land, but curiosity can drive them more than anything else. That makes them incredibly unpredictable. When it's just food, water, or shelter that's bringing them closer, you can eliminate those things in order to keep them at arm's length. When they're having a good look for the sheer fun of it; just because their intelligence demands they learn more ... Well, it's hard to know what they'll do next. Or where they'll end up. 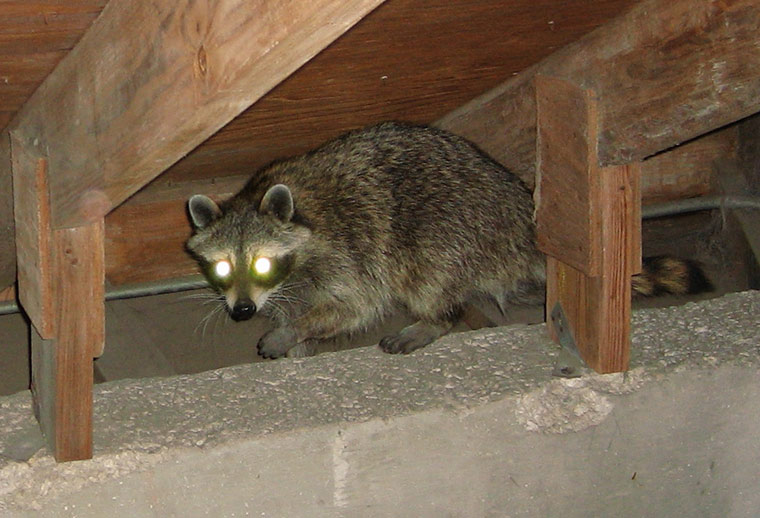 You do have options when looking at getting raccoons out of your attic.

Option One: Starve Them Out.

When animals are driven by food, eliminating that from the equation will discourage close contact. By removing all traces of food from your home and surrounding land, you are forcing the animal to travel more and more each time. This becomes a more prominent concern during late spring and early summer, when females usually have their young. For around four to five months, females will have young attached to them. If you can't see them, there's a good chance they are in a nest and this will be somewhere really hard to find. Any mother would make it as difficult as possible for predators to get to her new family.

Option Two: Wait It Out

In fact, you could try option one and option two together. Raccoons, particularly females with kits, will move from one den site to another, usually quite quickly. They don't stay in one place for too long, and will even move dens during the winter. They do, however, return to the same den sites time and time again. A mother will pass down information about feeding spots and den sites to her young and her young will, in turn, pass the same information to her family.

Waiting it out will work eventually, but it will only work for a short period of time, UNLESS you seal up the spots they were inhabiting, alongside the holes or damage that granted them access. If you wait it out and the family leaves but you don't seal up the building or space, it will only be a matter of time — months, maybe even weeks — before someone from the same ‘group' of raccoons comes back.

Repellents aren't a bad idea when you want to kick an animal out and then make sure it stays away for as long as possible, but there are two things we suggest you set in stone before you try them:

We recommend these guidelines because raccoons are devastatingly destructive animals when left to do whatever they feel like. If you try your hand at repellents and they don't work, you don't want to wait too long to see what kind of havoc they can wreak. You will need to repair all of this damage and clear up the mess, which can include contaminated nest material as well as urine and feces.

If you put repellents down and wait two to three weeks, you should see results. If you don't — the animal continues to stick around — it's time to change your approach.

Our second point — seal and repelling at the same time — is to prevent the animals from coming back. Your repellent can decrease in effectiveness over time. If you strike while the iron is hot, sealing up the holes once the animals are OUT, they have no way of getting back in again. You will have resolved your own issue.

Important point: You cannot seal up your home or building without ensuring that all raccoons are first evicted. If the mother has babies still in the den, those babies will die without access to their mother, who you will have just sealed OUT of the building.

There are so many legalities surrounding the trapping, killing, transporting, and releasing of wild animals, including raccoons, that we do not advise that you take ANY action without first making sure you are not breaking the law. The laws will change from state to state, with the changing seasons, and the status of the raccoon itself: whether or not it is considered a high-risk rabies vector and if it is an endangered or threatened species.

You will need LARGE traps if you plan to trap and then kill — between 30 to 40 inches long.

Traps must be place in areas that are actually visited by the raccoon(s). If you put the trap out the way, the animal probably won't go anywhere near it.

Traps need to be placed on an even surface, and they need to be checked regularly.

Bait is quite important, but not too much. Raccoons are scavengers so will, therefore, eat everything. Meat products are likely to go back quickly, as well as other fresh foods, and will also attract other animals. Cat food will likely attract a cat. Fresh fruit is likely to attract ants, flies, wasps, bees, and other insects. Rats and mice might join the party. Marshmallows seem to be a good choice.

You MUST make sure that you read the instructions of your trap and set it as they state. Do not use a faulty trap. Homemade traps are not advisable.

When it comes to killing them, carbon dioxide chambers are considered to be the most humane method, when you can't get a vet or wildlife rehabilitator to put the animal down on your behalf. In many cases and in many states, C02 chambers require licenses and permits.

Shooting is another option that you could look at, but this comes with even more legalities. Shooting is highly built-up areas is not generally permitted.

Animals, including raccoons, do not have a high success rate when they are trapped, transported many miles away, and then released. It can sometimes prove to be the least humane approach.

Kill traps can be used in some states, although usually come with restrictions and other things that you MUST look into and pay attention to. There are many downsides to using kill traps to get rid of raccoons in the attic. You might trap and kill another animal, including neighborhood pets and other wild animals — foxes, opossums, etc — that wouldn't otherwise have given you a problem.

This is usually the fastest, cheapest, and more successful way to get rid of raccoons that have taken up residence in your attic. Many wildlife control operatives will offer same-day appointments, can remove the animal legally, holding all of the appropriate licenses, insurances, and permits, and may even be able to find a humane approach to the job that you wouldn't have otherwise, legally found.

With the time and cost involved with other methods of raccoon removal, using an expert who can do the job quickly and efficiently is usually the best approach.