Raccoon Eviction Fluid – What Is It & How Does It Work?

One thing that you've probably heard a few times when looking into methods of raccoon removal is raccoon eviction fluid. This is one of very few repellent/deterrent-based approaches that we recommend you use when trying to get rid of a raccoon from your home. Most repellents simply do not work, or their effectiveness is not enough or takes too long to have useful effect. But this works, especially for raccoons in the attic. 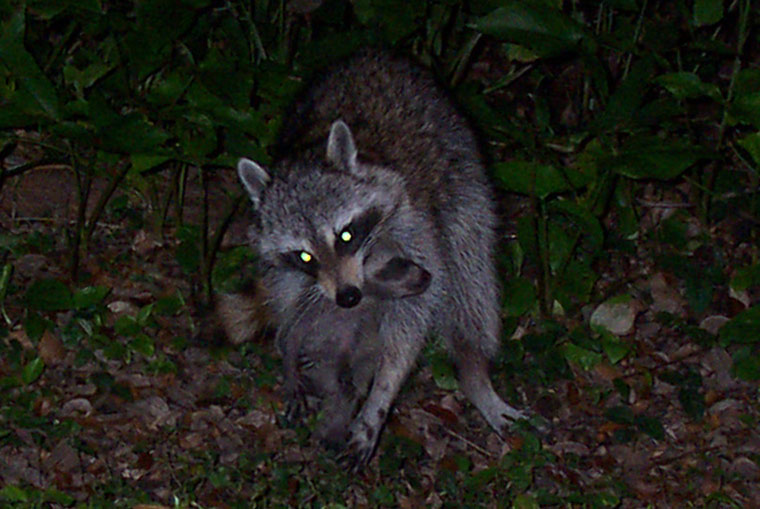 A combination of urine and other gland-based fluids from male raccoons, this raccoon repellent doesn't sound like the most pleasant thing in the world to use. Despite its unpleasant-sounding nature, the fluid, also known as wildlife eviction fluid or, just simply, eviction fluid, has been shown to work in cases of female raccoon interlopers with youngsters.

Why does it work? Well, it doesn't always work — that's the first thing you should know. It works in SOME cases, but not all. It works best in enclosed areas, like raccoons in a chimney.

The way that it is meant to work is by mimicking the scent of male raccoons. The fluid is made up of fluids and, therefore, scents that male raccoons would naturally leave in the wild, usually as a way of marking territory and exerting dominance over other males.

By using something that contains the scent of a male raccoon, female raccoons could be lured into thinking that one is hanging around, even when he isn't. She will think that danger is close, lurking around every corner, and the worry she will experience every time she leaves her young will drive her to move them. She will, in theory, pack up her nest and leave, hoping to find another spot that doesn't smell like a male is about to eat her precious kits.

Of course, there are a few reasons why this theory might not pan out for you:

1 – Mothers put both themselves and their youngsters in grave and very serious danger when she moves them from nest to nest. Raccoons actually do move their young fairly frequently, not staying in the same place for longer than a few nights at a time, but there are huge threats faced each time she does this. She will only want to move her young if she is sure the smell is not a false alarm and is actually a sign that a male is hanging around.

2 – If you have a male raccoon hanging on your land, the male-based wildlife eviction fluid might not have any effect at all. Rather than driving the raccoon away using fear and "natural" methods, you might actually rile the animal up, making it believe that it needs to fight to defend its territory. This makes life more dangerous for you, the rest of your family, and other animals in the neighborhood, pets included.

Eviction fluid may have some effect at driving away females, but it doesn't do the whole job for you. The fluid can't clean up food remnants left in the back yard to make sure that no animals are attracted by it and encouraged to take a closer look. The fluid can't seal holes. It can't tell you where those holes are, or where the nest might be hidden if there is one.

What eviction fluid CAN do is move the animal along a little faster, leaving you then free to do the rest of the work. You can't seal up the property until the animal and any potential kits have been evicted, and using the fluid might just encourage them to move home in the next couple of days, rather than the next few weeks or months.