How to Get a Raccoon Out of Chimney

I'm commonly asked how to get rid of raccoons in the chimneys. It's my job to remove critters from homes, and this is one of the cases that I deal with. It all starts when a homeowner hears noises in the chimney, usually just above the fireplace. Sometimes the homeowner knows that it's raccoons - due to visual confirmation of the animal climbing into the roof, and sometimes they don't know at all. It could also be squirrels. Of course raccoons usually sound bigger and louder than squirrels, but the acoustics of the chimney and fireplace are more relevant than the animal, so it can be hard to tell.

Why do raccoons go into chimneys? Mostly because it's like a big, hollow tree. It's a safe place in which to live, and for a female raccoon, it's a great place to give birth and raise a litter of baby raccoon pups. Raccoons are great climbers, so they have no problem climbing up and down the chimney flu, and off and on the roof to access the chimney in the first place.

How to Get a Raccoon Out of the Chimney: Professional wildlife removal experts use a special trapping system that mounts directly to the top of the chimney flu. Some use a special pole-and-trap system that forces the adult raccoon up and out and into the trap. The young raccoons, above the fireplace damper, are removed via mirror and hand removal or snare removal. It's dangerous to try to get the young if the mom is still in the chimney, because she might attack. It's also possible to get the young when she is out foraging, and seal the chimney with a proper steel chimney cap. Or, you can trap the mom in a cage trap on the roof or the ground near the climbing point, and then remove the young. There are a number of options. However, whatever you do, do not start a fire, as this will result in you needing to open the damper, and the scared raccoon possibly jumping into the house. It's also inhumane to try to torch animals alive. Remember, raccoons usually use a chimney to have young. 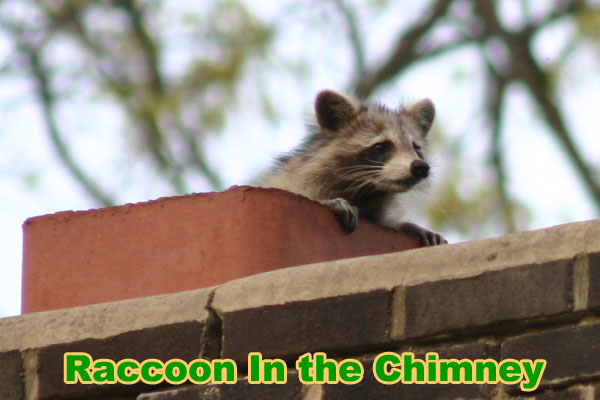 Raccoon in the chimney.

The above photo was actually taken by my father - he got a family of raccoons in his chimney, and his own son was nowhere in Pennsylvania to be found to help him! I had my buddy Kris, who I trained, go over and grab the babies, and catch the mother raccoon. All were safely let outside together, and a steel cap was installed on the chimney. Thanks to my dad for taking this great photo, and sorry I wasn't around to help - and after all the free dental cleanings you've given me over the years! 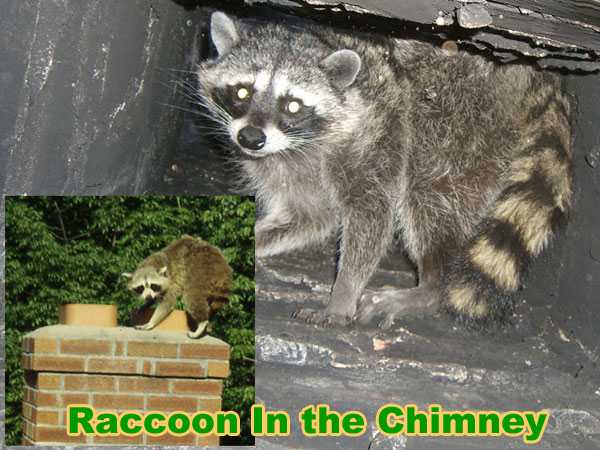 My brother-in-law got this great photo of a raccoon inside the flu. I guess I don't have anything more to say about getting raccoons out of chimneys right now. As is often the case with wildlife control, you probably want to hire a professional wildlife removal company to take care of your problem, rather than attempt it yourself and risk injury or property damage.

Real Raccoon Situation: Hi Dave, We are desparate to get the racoons out of the chimney, but don't want to hurt them. (We are not sure they are racoons but, something sounds large.). We have no way of seeing them as our chimey is STUFFED full. My husband put food and water up there, but it wasn't eaten. He blocked off their entrance and had planned on keeping them in the chimney until the babies were old enough to go out. Now we are not sure what is going on. My husband is worried that only the babies are up there and will starve. If the mother isn't there, what could we feed infants? We are very worried. Helen

My response: I see no reason to suspect that there are abandoned young in the chimney. If there were, you'd have very little chance of finding and raising them. You'd need to find a licensed rehabber in your area to take care of them. But that's moot, as the mother is surely still around, if you have raccoons that is. Sounds like you don't actually know exactly what is happening in the chimney. Maybe you should get a professional company in your area to come out and inspect the house.

Thanks for responding. There were 4 baby raccoons, but one had died. The mother was still in the attic.. The story is long. This is the shortened version. My husband trapped the mom and put her in a dog crate with the babies. The mother freaked so he let her out. She took one baby. My husband started feeding the babies. She came back. By then the babies were in the basement with a heating pad. My hub was trying to feed them infant cat milk. They weren't eating well so we called a raccoon rescuer. She said the babies were in good shape and she took them. Not a horrible ending, but not the best. It would have been better if the mom got the babies. If it happens again we will call the rescuer first. Thanks again, Helen

Real Raccoon Situation: David, Around 3 AM I hear noise in my attic. I'm right near the chimney. However i have caps on my chimney. I don't know if it's raccoons ,or squirrel, that are in my attic. The cap is still on my chimney. They keep me awake. I'm looking forward to your response, because I came across your blog today and am intrigued by the Repeating Live Cage Trap that attaches to the hole. I'm pretty sure the squirrel in my attack has young 'uns and the two Have-a-Heart traps are doing the trick. They've ignored the one in the attic that I put peanut butter in and then p-nuts in the shell and the one outside has caught the same small raccoon twice. Where can I get the Repeating Live Cage Trap? Help! Thanks, Luke

My response: Well, if the cap is in place, then the raccoons should not have gotten into the chimney. However, that's not always the case. Sometimes there's an opening on the side of the flu that leads into the chimney. A raccoon might be going through the roof somewhere, or in a hole where the chimney meets the roof - I've seen that happen before. It sounds like you don't know if you have raccoons or squirrels - either way, I really think you would benefit by having a professional wildlife removal company come out and inspect your house and take care of the problem properly.