Having a raccoon in a trap is, in some ways, actually no better than having a raccoon invasion in your house. Well, apart from the fact that you now have that animal confined to a small space and you can move it around without fear of being scratched, bitten, or infected with the rabies virus. 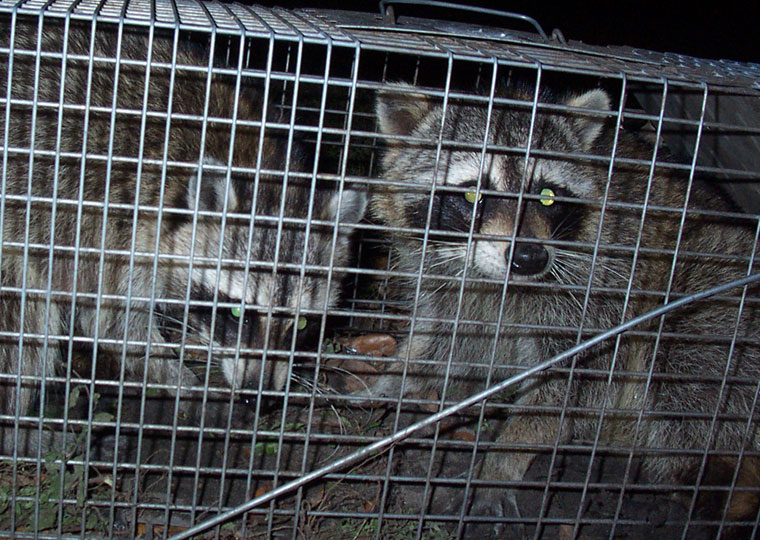 Also read about:
How to trap a raccoon
Raccoon trapping tips
How to kill a raccoon
A Guide to Catching a Raccoon With a Snare Pole Trap
Raccoon Trapping Laws in America
Where To Release a Raccoon

If you do have a raccoon in a trap, you have one option — research. You must look into the laws and regulations for raccoon trapping in your local town, city, county, or state. They will change from place to place, and they will also change depending on the actual status of the animal. In some states, raccoons pose a very big threat to wildlife, pets, farm animals, and even people, because they are one of the most prolific rabies carriers. In these places, destroying the animal is usually the only outcome.

If you have got yourself a little raccoon in a trap, you could always look at killing the animal, but the fact that you have a humane trap with a still-alive animal in it suggests that you might not want to do that. Shooting will come with restrictions when you are in highly built-up urban areas. Other methods of euthanasia are by using Co2 chambers, which are usually only available at a Vet's or from a wildlife rehabilitator, or by a form of lethal injection. Drowning, starving, hitting, and even poisoning raccoons are not humane options.

You could look at releasing the raccoon you now have in your trap, but you will also find that both transporting and releasing options are heavily restricted in certain areas, primarily where this animal is considered to be a danger and a nuisance. You may need a permit for both, and you will also find that permission will need to be granted for the specific land on which you wish to release the animal. The final option is to release the animal on the land on which it was trapped, but that doesn't always help, especially if you're trying to GET RID of a raccoon.

One of the best, quickest, most humane, and simplest things to do with a raccoon in a cage is to hand it over to wildlife rehabilitators so they complete the second half of the job, ensuring the best outcome for both you — the homeowner — as well as the raccoon. This service may come with a charge.

READER EMAIL: Hi David, I’ve read your website articles and they are quite good — but they seem to deal w/raccoons in an attic or crawl space, or getting into gardens and garbage. My concern is the potential risk that feces (particularly when dried and particles can become airborne) present to ones health. I requested and received a Nuisance Animal Removal Permit from the Dept. of Natural Resources, and have trapped them. While that’s a solution to getting rid of them (temporary because there’s a never ending supply of raccoons) it doesn’t really solve the problem of "pooping on the deck" — there’s always more raccoons. I would be curious if: 1)you have any thoughts on the potential health risks from raccoon feces, and, 2) any suggestions in dealing w/this problem; unfortunately, it’s not a new one. Thanks, Al

My response: Just make sure you don't eat any of the feces by accident. It's hard to stop raccoons on a deck, unless you get a really good fence.