The Best Ways to Keep Raccoons out of Your House

There are so many options open to you when it comes to trying to keep various wild animal species out of your house and yard, but still, hundreds and thousands of home and property owners around the United States are ignoring the problem. 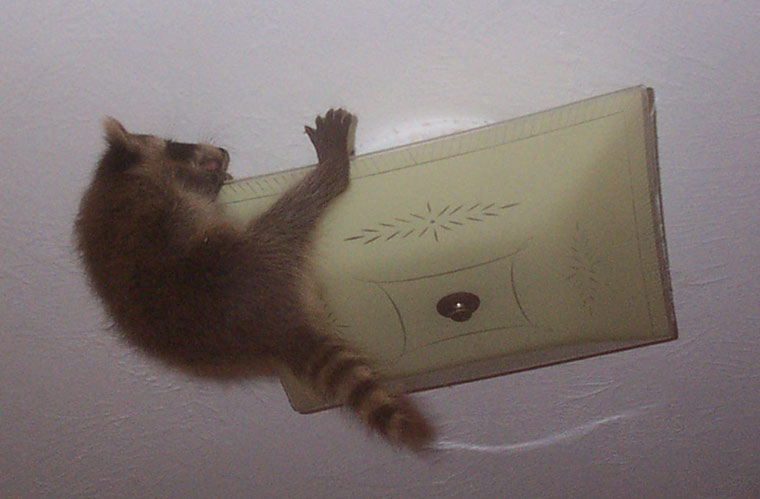 Also read about:
How to keep raccoons away
Raccoon repellent
What Attracts Raccoons?
Noises Raccoons Make When They Live In Your House

"The animal will go away of its own accord in a day or two."

It might do this, yes, but raccoons aren't quite as quick to jump ship as you have been told. In fact, quite the opposite. In many cases, a raccoon will have needed to work quite hard to get into that property in the first place, so it isn't going to want to give things up without a fight. And probably quite a vicious one.

Raccoons do tend to travel; that that works very well in your favor if you are a home or property owner with a raccoon problem. Mothers will move kits from one nest to another, usually using the same collection of den sites, to make sure they don't not come under attack from predators, they are not caught out by human traps, and there is plenty of food close by.

Males travel too, but they will congregate in female den sited during very cold winters. In fact, males are known to be quite territorial against other males, and they have quite a bad rap as far as the females and kits are concerned too. It is fairly common for males to eat weak, sick, or unprotected young female raccoons, and the kits are a small, cannibalistic dish too. You'd be surprised at how many wild animal species will actually resort to cannibalism in order to survive. Even people in recent years have had no other option, such as incidents reported in mountaineering rescues.

In reality, females raccoons do move her young regularly, making the sit-and-wait approach an effective one. That female will return though, and so will her kits. Raccoons actually communicate with each other about feeding and den sites that are fruitful and are well-known to circle the same sites in one area for many years, just moving from one to another, then to another, and then back again.

Even if you move them out, it will only be a matter of time before they come back.

So, if sitting and waiting isn't the best way to get rid of a raccoon, what is?

The answer is simple > remove the animal and then raccoon-proof the building and surrounding land. Life is rarely that simple, though. Raccoons and their nests are usually in quite difficult to reach places, such as in the attic. These animals spend a lot of their time up in the trees, the branches, leaves, and height giving them the advantage against certain predators. Tree hollows provide the perfect rural spot for a den or nest, but when these aren't freely available, an attic is a great substitute in urban areas. These creatures now live more in urban areas than they do in the rural ones, so something must be encouraging these animals back time and time again. Read more about how to keep raccoons away.

Attics, just as one example, are not frequently visited areas of a home by people, and that's what makes it the perfect spot for a wild animal interloper. It's dark and warm, offers shelter from the weather and elements, and also protection from predators, including foxes, coyotes, etc. There is always plenty of food nearby, because humans need food in order to survive, and people aren't really known for being that tidy in the way that they go about things. There is also plenty of water in the area, because humans need water too. Swimming pools and garden or park ponds offer exactly the same things that wild streams, rivers and lakes will offer. In fact, swimming pools are usually used as latrines by these critters. If you've ever spotted what looks like cat or dog poop in your back yard pool, there's a pretty good chance neither of those animals were to blame for the mess; it could very well have been a raccoon.

There are many ways to attempt the task of wild raccoon removal, but your first priority should be to get the animal out — evicted — safely. Repellents and deterrents rarely work, but you can try them to drive the raccoon away. Eviction fluid is one of the only repellents that we can actually recommend to you, designed to mimic the scents left by wandering male raccoons, which are a threat to females with young kits.

You could always trap the animal, but you will need to do some pretty in-depth research first. The laws covering the trapping, moving, and releasing of this animal are extensive and frequently change, particularly from one area or state to another. Raccoons are also quite difficult animals to trap, and come with a string of health concerns, including diseases such as rabies. Raccoons & Homeowners Insurance: Am I Covered?

Exclusion devices are another approach, but this isn't one that works well when you have kits to think about, and neither is trapping. Trapping a mother without her young will result in dead young and a stressed-out mother who will then probably suffer the same fate. Excluding a mother raccoon from a building that still has her kits inside will also have the same effect.

You can't seal up the building unless you can be sure all animals inside it has first been removed. Otherwise, they'll die in there. The only thing worse than a live raccoon in your home, is a dead one.

Wildlife rehabilitators can help and, in many situations, they actually work out to be one of the cheaper approaches. You can hire them to do all or part of the job, meaning that they can remove the animal, seal up the holes, clean up after it, and make things return back to normal again, just giving you a bill at the end of it to pay. If you don't want to pay out for or can't afford the full job, you can hire in a wildlife rehabilitator to just come out and trap/remove the animal on your behalf. With the right insurances, licenses, and knowledge, particularly of the local laws, by using an expert you can also be sure that you are not breaking any laws by hiring in a professional to do the actual removal part for you.

If you know where the animal has managed to get into your home and are willing to not only repair the damage, but also clean up after it and seal your home up to the best of your ability, using long-lasting and durable, raccoon-proof materials, you will only need the rehabilitator to do the removal part. You should be aware; however, that the disease threats do not go away just because you have removed the animal from the equation. Raccoon skat (feces), urine, and even biological or nesting material can also still carry traces of viruses, bacteria, and parasites. Raccoon roundworm, for example, lays eggs inside the raccoon which are then passed out in feces. You can't see these eggs; they are microscopic. Handling raccoon feces incorrectly could result in an infection of raccoon roundworm throughout your entire household, both people and pets affected.

What is the best way to get rid of a raccoon?

The answer is to definitely use a professional if you don't know or aren't sure of the right approach to take. In some cases, it might not be possible to remove the animal using traditional methods, necessitating a snare pole or similar, which shouldn't be used by someone who is inexperienced.

If you are in any doubt of what to do next, give your friendly and local wildlife rehabilitators a call. They'll be able to offer some handy advice and point you in the right direction if you don't really need their services at all.