All about raccoon mating habits

At about a year old, both male and female raccoons are ready to start their own families — they are considered to be sexually active. Although it is common for females to stay with their mothers for longer than the males do, the males heading out to start sowing their wild oats pretty early on, both sexes can and will reproduce if given the opportunity after about twelve months of age. 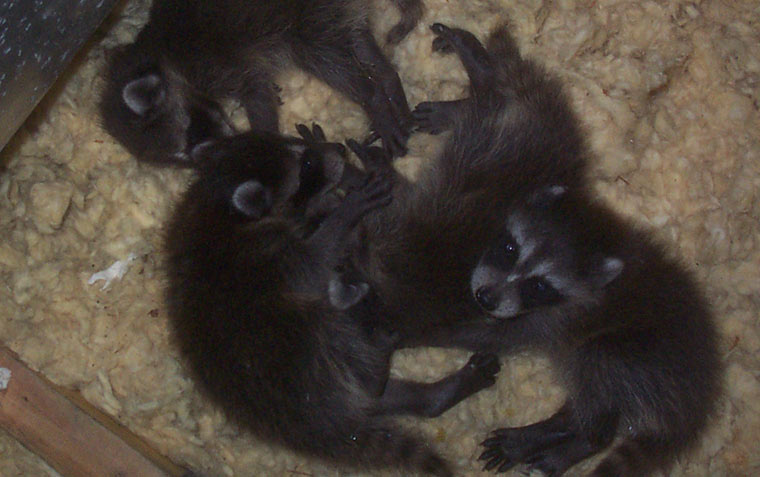 Also read about:
Do Daytime-Active Raccoons Have Rabies?
What Does a Raccoon Eat?
Raccoons - Do they make a good pet?
What Are Raccoons Scared Of?
Do Raccoons Use Tools?

The mating season usually falls in spring, but in some places, where the weather gets warmer sooner, females and males can come together to mate as early as mid to late January. Cooler areas see slightly later mating seasons, even cutting into June and, in some rare cases, even July.

After mating takes place, the males leave. Just like many other animal species, the males play no role in rearing the young he creates, and in some cases, male raccoons will both hunt and eat young raccoons in a nest, especially if they have been left unattended by their mother. This seems to be more common during very bad or long winters, when food is so scarce, cannibalism seems the only option.

Female raccoons are pregnant for a couple of months, usually between 55 and 65 days, making birthing periods between March and August. The earlier mating begins in the spring, the sooner the babies are born in the spring and summer. This ensures that they are as strong and as ready as they could be for the next winter period, which will inevitably kill off a large portion of the young raccoon community. It is increasingly common to find female raccoons in large groups, helping to feed each other, raise the young, and protect one another. Even males can get together with females, although females are very wary of this, and, in very extreme cases (such as bad or long winters), males will even congregate together in dens to stay alive.

The females will do everything for her young for the first three months — feeding them, keeping them warm, protecting them, etc. Sadly, out of between one and three kits that are usually born per litter, only around half of them are expected to last for longer than a year or so, especially in areas of high human activity. Cars, traps, and people in general are quite dangerous for the raccoon population, but also very good for it too, in terms of people and food.

When the youngsters, also known as kits, are sexually active — around the age of one year — they are ready to leave their mothers, although, as previously discussed, the females do tend to stick around.