Everything You Need to Know about Raccoons

In order to successfully remove a wildlife invasion, you must first understand the critter you're up against. If you have a raccoon hanging around in your back yard, for example, or you think one might have started squatting up in your attic, you will have a much greater chance of not only getting the animal out, but also keeping it out and preventing future attacks. 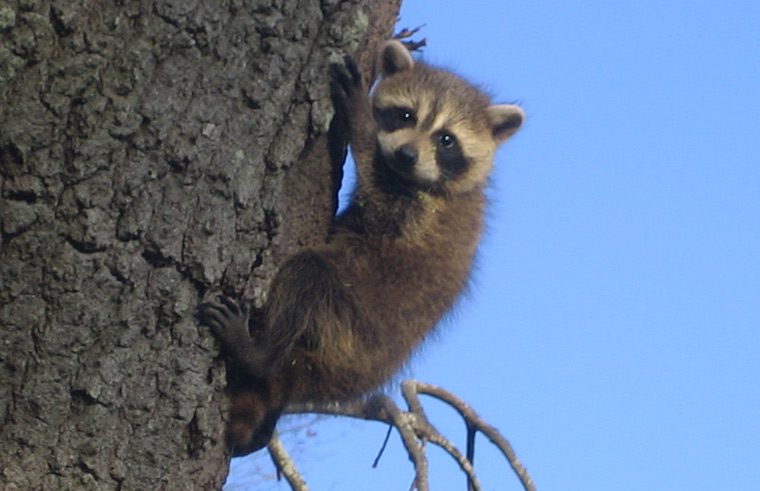 Also read about:
Do Daytime-Active Raccoons Have Rabies?
What Does a Raccoon Eat?
Raccoons - Do they make a good pet?
What Are Raccoons Scared Of?
Do Raccoons Use Tools?
Where Do Raccoons Live - Rural or Urban Areas?
Where To Release a Raccoon

Raccoons are actually pretty cute-looking creatures and are also known by a few names. Some know them as simply ‘racoon'; others call them the ‘common raccoon' or ‘North-American raccoon'. Their mostly-grey and thick coats can be tinged with light and dark grey tones, browns, blacks, and even shades of dirty or off-white too, and they're about the same size (or just a little bigger, in some cases) as your average domesticated house cat. You're looking at 20-30kg in weight maximum, with a body length that measures in at 30 inches maximum. They usually fall somewhere in the 15-20 inches category.

The raccoon is mostly known for its facial features, primarily, the mask. The dark eyes with white or light surrounding really do make this wild critter look like a burglar, and the mask suits the character. The raccoon is actually quite the little thief.

Where Do Raccoons Live?

In ‘the wild,' raccoons would have lived in a number of places. Going back through the years, you'll see this animal set up home in areas filled with trees — forests of both mixed and deciduous varieties. The trees offer protection, and the raccoon's initial instinct is to run in an upwards direction AWAY from predators or danger. As time has gone by, they have evolved, now capable of living in a vast array of mixed habitats, including urban areas, and even stretching as far as to the mountains and by the sea — coastal spots.

Although once considered to be a North-American critter (and a pest), you will now find the raccoon in various places across Europe – Denmark, Germany, France, Czech Republic, and Switzerland, mostly as a result of deliberate introductions and pet/captive animal escapes. They have also extended their habitats to as far as Japan.

Raccoons live in dens. Old trees, specifically oak trees, are a big hit, particularly with cosy tree hollows. These make great places to sleep away large amounts of the winter, as well as providing enough protection for then a female raccoon gives birth. Crevices within rock formations also provide a similar safe place, and some caves fit the bill too. With more raccoons encroaching on human areas, human residences and commercial or industrial buildings are also proving to be hard-hit, often providing the exact same things that rock crevices and hollows in trees would have provided, in their old ‘haunts'.

Knowing WHERE a raccoon lives will give you a good idea of the places it is likely to be hiding out in your home/business or yard.

With absolutely perfect conditions, raccoons can live for a good couple of decades. Sadly, these ideal conditions only seem to come in captivity in this day and age, with pet and captive species living for over twenty years. In the wild, raccoons are only expected to live to around two years of age, with just over three years being considered ‘long life'. A number of factors come into play — where the creature lives, for example. If the raccoon choose a territory that is close to human traffic — lots of roads or cars/people — a large number of the group in that area will likely fall prey to vehicle accidents. In areas where hunting is rife, certain seasons (hunting seasons) will see the populations of raccoons decline, and then pick right back up again. Disease, how bad the weather is, and human interaction are also big factors.

During the earlier parts of spring — late January right through into March – the mating season is triggered, usually by an increase in the amount of light that we see through the changing seasons. Different places will see different mating times, however. Northern states usually see earlier mating seasons than the southern states. Once mating is complete, males go back to being solitary and the females keep together a little more. Males have absolutely no part in rearing young and may even feast on raccoon young that he finds in dens and nests.

Female raccoons see male raccoons as a genuine threat to her young. She will move her kits if she smells a male raccoon close by. The urine of male raccoons is frequently used in ‘wildlife eviction fluid,' which can have some success in the moving-along of pest raccoons.

Pregnancy will last from 50 days to 75 days, although usually the raccoon will give birth at around day 60-something. Young raccoons are called either cubs or kits and a mother can have as many as five kits per litter. The usual figure is around two or three, although only half of her young are expected to live for longer than the first twelve months or so. As with other animal species, if she senses that one of her young will die she will abandon it, focusing her attention on the one or two remaining that are more likely to survive.

Kits have only a very light dusting of fur when they are first born, and they are also both deaf and blind. They rely on their mothers to feed them and protect them for the first three to four weeks. It is only after 20-or-so days that they will get their senses of hearing and sight. It won't be until seven or eight weeks of age that they will start eating solid foods, and it won't be long after that they get adventurous, venturing further and further from the safety of the den. At four months old, they are pretty much fully weaned, but the mother will keep them close for a while longer, teaching them things such as where certain den spots are, or various areas to avoid. It is also believed that feeding grounds are passed on from others too. Different generations of the same raccoon family are frequently observed going back to the spots that their mothers and grandmothers also spent time in.

The males will go off and lead a relatively solitary life, but will think nothing of rejoining old groups to help get through the winter. It is not unheard of to find male raccoons in the same winter dens as females with their young, without any conflicts. Females do tend to stay with their mothers for a little longer than the males.

What Do Raccoons Eat?

Raccoons are scavengers. By definition, this means: "an animal that fees on carrion, dead plant material, or refuse". In short, a raccoon will eat pretty much anything as long as it gives them something in the way of nutritional value and doesn't taste too bad.

It is UNUSUAL for a raccoon to hunt down and then eat prey that is still alive. It might chase after a particularly slow rat or rabbit, but raccoons aren't really known for putting in the most amount of effort, especially now they have learned that food is much more easily accessible elsewhere, for a fraction of the work involved.

Raccoons will eat anything — road kill, out of date food, leftovers, pet food, agricultural crops, even chickens, although this will normally be as a result of going after the eggs. They are driven by food and will do almost anything for it.

Food is normally the thing that attracts raccoons to your property in the first place. Get rid of the food and you'll go a long way to preventing future pest control problems.

If you leave a raccoon alone, just observing the animal from the kitchen window, you will find that it is funny, sometimes clumsy, very intelligent, and incredibly determined. If it wants something, it will try very hard to get it, even learning new skills in the process. Raccoons have been noted learning how to use latches on windows and doors to get to food that is on the other side. It would be wise NOT to underestimate this cool character.

During mating seasons and when the females are rearing kits, everything is pretty tense. Males are riled up, ready to fight each other to get to the best females. When the females have their babies, things don't calm down. They become wary of any males that come close and will act aggressively and defensively to keep her little ones safe.

Conflicts between raccoons and people, as well as raccoons and other animals, usually happen as a result of human intervention. People feed raccoons and when the stream of food stops, the animal gets angry and may lash out, almost in the same way that a two-year-old child would if you were to take away the toy they were playing with. Raccoons and toddlers have quite a lot in common.

If you accidentally come across a raccoon, the raccoon is more likely to scamper off, than stay and fight. You are a bigger predator to a relatively small wild animal; it's not going to want to stay and fight when it knows it probably won't win the battle. If the raccoon has no choice but to fight or it feels the need to defend itself, it will. It has sharp claws with dextrous paws, alongside some pretty sharp teeth you wouldn't want to be on the receiving end of. It also a well-known carrier of the rabies virus; just one more reason why you wouldn't want to get too close.