Opossum in the Basement or Cellar

Possums are very opportunistic animals. They are good climbers, but they also like to live at ground level or below. I commonly deal with them under decks and sheds, and they often get inside people's basements. Sometimes they even fall down and can't find a way to get back up, and then they're stuck in the cellar.

If a possum is stuck down in the basement, you can either set traps to catch and remove it, or catch it with a snare pole, or even remove it by hand, grabbing it by the tail, as seen here in this case of an opossum in the cellar of a house. 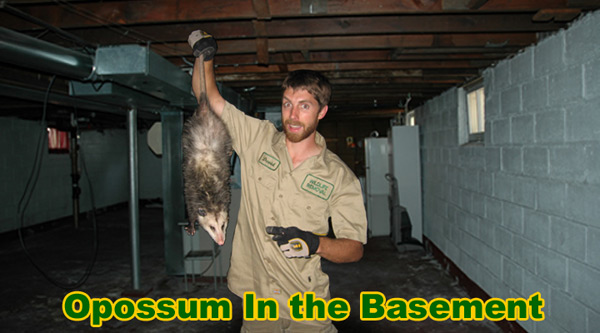 Possum in the basement.

A cage set in the basement has a very good chance of catching the animal, which you can then take outside. Beware of babies in the spring or summer! You don't want to just catch the mother possum and have all the babies running about! I've seen that a few times. Once the animal(s) are out, find and seal up the hole(s) they used to get in, or you're just going to wind up with the same problem again down the road. In terms of proper technique for removing the animal, it's the same as in other places, such as the attic, so You may want to read some of my other opossum articles: possum removal - opossums in the attic - photos of possum poop - types of possum problems - possum trapping - how to catch a possum - pest control of possums - possum in the wall - possum in the house - possum in basement - possum repellent - types of possum damage - best ways to keep away opossums - how big do opossums get? - why opossums play dead - about opossum tails.

I once was running low on traps on hand in my truck, and needed one for a job where an opossum was stuck in a basement. I already had full traps, including one with a raccoon, and one with an opossum. Desperate for an empty trap, I carefully transferred a raccoon into a cage with an opossum, and hoped that they'd get along. They did not. Now, pitting a vicious 20 lb. raccoon equipped with the strength of a small bear and the temperament of a badger against a 10 lb. animal that is known for playing dead when in danger may not seem fair. Heck, it seems like the end of the road for Mr. Opossum. When it became clear that both animal's tempers were flaring, I became more than a little concerned for the marsupial. Surprise surprise, those 52 teeth which the opossum apparently only displays for "show" did quite a number on the masked bandit, keeping him well at bay until I could separate them. This animal rose to the challenge and surprised me with amazingly aggressive tactics. The opossums tenacity surprises me again and again.

Opossum Situation: Thanks so much for your extremely well-written and informative website. I live in Nashville, TN and have just called a local company that was recommended to me by a pest control professional that I trust to humanely trap and remove the opossums that have lived in my basement for at least the last couple of years. I only recently became aware of the health concerns (because otherwise they are just so darn cute, and last year did not want to separate mama from babies we could hear in wall). I am finally taking care of this—will be sure no babies, or if there are, that they are removed, but after doing some research on the subject am now quite freaked out about the possibility of my son contracting roundworm (or my husband or myself). Are you aware of any cases of opossums with this being reported in middle Tennessee? I read your information about FL and north GA, which is not far away. Am hoping that it has not reached this area, but it sounds like it won’t be long if it isn’t here yet. Time to evict the tenants in our basement and try to sanitize things to the extent possible. I am going to have nightmares imagining some sort of neurological damage from parasites….

My Response: I just answered my own question—found this article which you may find interesting. While that is eastern TN and I am in the middle area, given the findings in GA and east TN, I am going to assume that there are certainly opossums around that could be carrying this parasite and will take precautions accordingly, although belatedly, and hope that ours do not fall into what at least seems to be the minority at this point. Thank you, Judy