How to Catch a Possum

Possums are not aggressive or fast, but they will (sometimes) defend themselves. Sometimes they'll just play dead. Anyway, they have these wonderful, long, scaley, prehensile tails. The tails are strong, and you may have heard that a possum can hang from its tail. Well, they can, although they almost never do that in the wild, as there's no reason for it. Still, the lesson here is that you can hold them by the tail without hurting them. 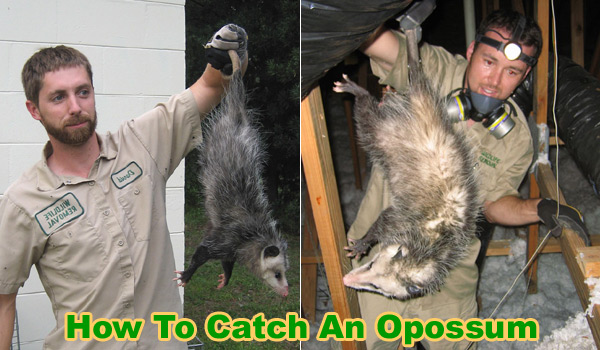 How to catch a possum.

Step 1 - Find the opossum.
Step 2 - Approach it. Doesn't matter if you creep up or confidently strut.
Step 3 - Put on your thick leather gloves if you want safety, or go bare handed if you're brave.
Step 4 - Wave one hand around in front of the possum's face to distract it, and then grab the tail with your other hand. Now lift, and hold the animal away from your body.

Voila! You've caught the opossum. Now you can move it to wherever you'd prefer it was, instead of the place it was sitting prior to you picking it up. You may want to read some of my other opossum articles: possum removal - opossums in the attic - photos of possum poop - types of possum problems - pest control of possums - possum in the wall - possum in the house - possum in basement - possum repellent - possum poison - types of possum damage - best bait to trap an opossum - should you handle an opossum with bare hands? - how can an opossum damage your house? - how can opossums damage your attic or shed? - best ways to get rid of opossums - are opossums good pets? - why opossums play dead - opossums under the shed or porch - how do wildlife rehabilitators take care of opossums?.

If you relocate your animals, you may note something interesting about opossums. Whereas a squirrel or raccoon will bolt from the cage like a man from a quilting convention, the opossum will just sit there, content to rest its laurels behind bars. I've left traps propped open gone off to do other things, and returned over two hours later to find the opossum still sitting in the wide open trap. I don't know if this is a case of learned helplessness or whether opossums are really quick environment assimilators, but getting an opossum to leave a cage can be harder than getting them to go inside in the first place! Tilting the trap doesn't seem to work, as the opossums claws can cling with surprising strength. Reverse-psychology upward tilting has no effect either. Prodding with sticks only causes the opossum to turn, bare its teeth and hiss, if it reacts at all. I find that the best method to get an opossum to leave a trap is to squirt it with some water. A hose is best, but a squirt gun works in the field. If you don't have water, the next best tactic is to actually blow onto the animal. I doubt they mind bad breath (suckers probably enjoy it) but it seems to scare them enough to get them to move.

Opossum Situation: Hi David - We heard/saw something tonight in our loquat tree and with your pictures we were able to determine it was an opossum! Look at those teeth!! I liked the birds feeding off the loquats, but still wanted the trees removed due to the area/size we have for them and I heard they can attract rats when the loquats fall. Now I'll be getting those trees removed sooner than later! At first we thought it was a monkey LOL-we're new to Florida-3 years-can't you tell? But in our defense, we live in Tampa, just a hop, skip and a jump from Busch Gardens and you never know what escapes there. I'm guessing remove the trees and the opossums will go somewhere else when their food supply is gone? I just contacted our landscaper about removing the trees. Now my husband won't have to fight me on removing both trees (I wanted to keep one so I can watch the birds). Thanks again.

My Response: I wouldn't worry much about opossums hanging out outside and in the trees - there's a TON of wildlife in the Tampa area. As long as it doesn't get into your house/attic and cause you damage, I generally say live and let live. But if the opossum's presence in the trees bothers you, then yes, removing the trees should definitely cause them to forage elsewhere. The same goes for rats as well. If you do have a wildlife problem in your house in the future, my friend Mike in Tampa would be glad to help you out.

Article topics include: How to catch opossums, catching possums, how do you catch an opossum, opossum catching, ways to catch possums. Do possums have rabies?