There is no effective opossum repellent. I've witnessed countless clients try to use mothballs, ammonia, coyote urine, high-pitch ultrasonic sound blasters, regular radios, etc, to get rid of opossums, but these things don't work. Opossums just don't care. I know, because I end up going to these houses where people have tried out cheap ($14.95) possum repellents, or even home made possum repellents, but it didn't work, so I was called out to properly trap and remove the animal. 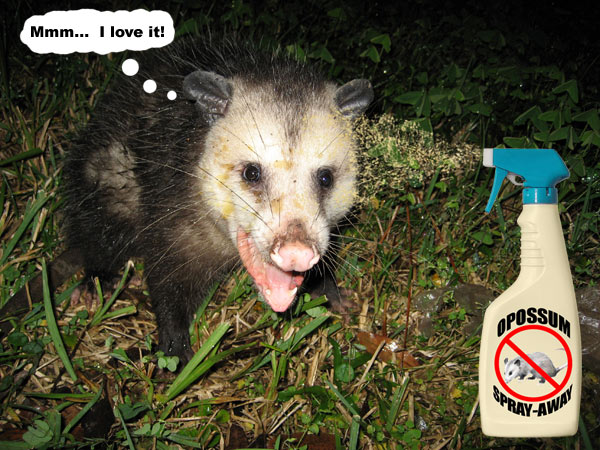 Possum Repellent Spray - Of course, I made up this so-called product.

I think opossums actually like some of the smelly repellents people use. Opossums are definitely the smelliest animals that I deal with. They don't possess the raw capacity for stink that a skunk does, but skunks rarely spray if dealt with correctly. Opossums always emit a musky odor which permeates a box trap, and they almost always leave copious amounts of urine and feces. I try not to leave a cage trap with an opossum in my truck for long, because it will surely create a mess on my truck bed. It's not just the smell of this mess that bothers me, but I wonder if the scent of an opossum might rub off onto, say, a squirrel trap, and make that trap less effective. One solution to this problem is the use of solid walled box traps, such as the Plasti-catch, but when you catch an opossum in a Plasti-catch, the smell will linger for a long, long time. Perhaps it would be wise to dedicate a few traps just for opossum. They sure don't seem to mind the smell of their own, and I often think of it as an attractant.

Opossum Situation: David, I have a couple of possums living in my attic. I only recently discovered them and they are becoming quite problematic. I purchased 8 ounces of pure coyote urine from a local fee store and put that into small cups. I put two cups near the entrance I know they are using, and then four other cups around the opposite end of the attic. I also spritzed a little of it on the roof where I had seen them walking around two nights ago. I did this around 4:30pm. I heard them around 8pm, but they were being very quiet in their moving around. Then I did not hear them until 10:30pm. Again, they were quiet, but moving around near the entrance they have been using. I thought they were maybe moving their babies out. Well, it's 3am and they were slamming around - woke me up. And they were right next to (like within inches) of where I knew one of the strongest smelling cups of urine was. Should I put out even more of this stuff? Or does it take a while for them to figure it out?

My Response: Coyote urine usually doesn't work. In fact, when it comes to opossums, it might actually lure them in, I kid you not! You probably want to do it the right way - with trapping and removal.

Can You Use a High Pitch Sound Deterrent Machine Against Opossums?

Electronic repellents like the high pitch sound deterrent machine are well backed with lofty claims and buyers therefore have a high expectation of what they want to see them achieve.

These machines emit a high frequency sound that is targeted at confusing and scaring the nuisance animals away. This high frequency sound measures at about 20000 Hertz, which is higher than the normal frequency that is picked by human ears. Opossums and other animals can however hear this sound because of their supersonic auditory system. Being inaudible to humans makes the machine better suited for use around residential areas, although domestic pets with supersonic hearing ability may have some problems with it. The machine is usually powered with electricity or battery.

The success rate recorded for electronic repellents however, falls really short of most buyers’ expectation and it can thus be concluded that high pitch sound deterrent machines are not effective in deterring opossums. Opossums hear the irritating sound quite alright, but have grown quite adept at tolerating it in order to achieve their aim of being in your yard. And with time, returnee opossums get so used to the sound that they totally ignore it.

Coupled with their ineffectiveness in banishing opossums from your property, most sound deterrent machines are also expensive to purchase. Wildlife professionals would tell you the only effective method of ousting these pests is to trap and remove them.

If you still want to try deterring them the electronic way, it is wise to use this method in combination with other measures to guarantee results with the opossums.

Your best bet as a troubled homeowner is to adopt exclusion practices that will block all access of wildlife into your space, and live-trap any resident opossum. Live traps have a good success rate, are cost-effective and do not harm opossums; they are also environmental friendly.

Some folks don’t really mind having opossums on their property because they help to control most other pets. They help you eradicate the mice, roaches, insects, snails, slugs, and even snakes. On the flip side though, they are just like other wildlife pests in that they are scavengers who carry parasites that in turn transmit diseases like leptospirosis, tuberculosis, relapsing fever, tularemia and spotted fever. This is aside from their propensity to make a mess with the garbage and with their droppings. It is no wonder that most home owners prefer not to have them at all.

There are several types of opossum repellents that are available commercially for the purpose of chasing the rat-like mammal away from your yard, but do they truly work? In the same vein, many folks swear by homemade repellants, with preparation methods readily available for any do-it-yourself home owner. Opossum repellants basically aim to drive the animal away from your yard by using its sharp sense of smell against it.

Wildlife professionals would tell you the only effective method of ousting these pests is to trap and remove them, but let’s take a look at some raccoon repellants available in stores:

Predator urine: many of the solutions sold in stores are touted to contain the urine of opossum predators like fox, coyote, bobcat, and even bear. Fox urine has been found to work best in repelling opossums. These products come in liquid or granule form and may require mixing with other ingredients. However, predator urine-based products do not have a great track record or success rate in repelling opossums. Properly sourced, straight urine has a slightly better chance if applied to an attic or chimney space.

Ammonia: ammonia-soaked rags are commonly recommended to solution-seeking home owners because of the repugnant smell that will surely chase the unwanted critters away. It is however, pertinent to note that an odious smell is not enough to deter an animal fighting for survival. Those hungry possums will overcome their aversion for the odor when food and shelter are at stake. Thus this solution rarely works. The same applies to other strongly-scented fluids like bleach and vinegar. Ammonia is particularly distressing to the eyes and nose of wildlife and has a better chance at being effective when applied in an enclosed space.

Moth balls: they incorporate the chemical, Naphtalene, which has a very strong smell to repel opossums and other wildlife pests. That is what the sellers claim. In actual fact, it has been proven severally that wildlife are not affected by the scent of moth balls. Never mind what the manufacturers claim. The use of moth balls as repellant is strongly discouraged as they do pollute the environment and are capable of causing cancer.

And some natural remedies too!

Motion activated sprinklers: these are placed out in the yard and working with a motion sensor, would spray any opossum that passes with water. This is meant to startle them into running away, but again, a sprinkle of water would scarcely drive a foraging critter away for long. They usually find a way around it with time.

Dog or cat hair: Hair collected on a brush after brushing your dog or cat is collected and deposited in small mesh bags and hung around the trouble areas. The smell of the pet hair, especially dog, is believed to trick the opossum into thinking there is a predator nearby.

Crushed Garlic: the pungent aroma of garlic cloves is believed in some quarters to keep possums at bay.

The only fool-proof way to really keep the opossum out of your property is to remove all traces of food and to practice exclusion by proofing your building, blocking all possible entry points.