Opossum in the Wall 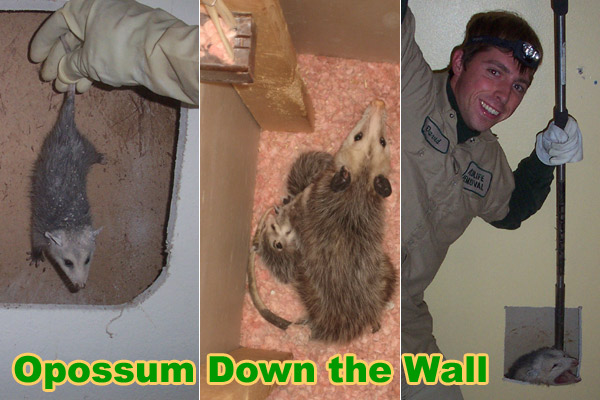 Opossums in the wall.

In the photo to the left, there were some baby opossums stuck down a wall. Mother possums go into attics and often have up to a dozen young, and the baby possums run all over the place, and they commonly go down walls, where they get stuck. The homeowner called me when he heard scratching. However, I've dealt with many cases of dead baby opossums rotting and stinking in walls, so usually the homeowner doesn't do anything until the bad odor starts.

In the photo in the middle, we see a mother opossum with babies down a wall. She actually can climb up and out. They are really good climbers. When I go into an attic to look for opossums, I usually look down all the available walls, and that's where I find them.

That was the case in the right photo. I was called out to a house with noises in the attic, and the first wall I looked down, bam, there was the opossum. I was not able to snare it from the attic because there was no room, so I cut a hole in the wall and removed it there. Little did I know, that particular attic had four adult opossums, all of them down different walls! Needless to say, I had to return to that house a few times.

For more advice on how to get possums out of the wall, you may want to read some of my other opossum articles: possum removal - opossums in the attic - photos of possum poop - types of possum problems - possum trapping - how to catch a possum - pest control of possums - possum in the wall - possum in the house - possum in basement - possum repellent - types of possum damage - best ways to keep away opossums - how can opossums damage your attic or shed? - what is the opossum's diet? - what to do if you find an orphaned baby opossum - how to remove opossums from the garden - is trapping an opossum legal?.

Opossum Situation: Thanks for site and info I have a question for you. I know the way the possums get into the attic, and then crawl down into the wall, the question is if I remove the branch that they use to get in there will they jump from the roof. I don't want them to die in my walls. I think once I take away the branches cloesest to the house I should be fine. What do you think?

My Response: In the case of an opossum, removing the branch might help. I do think the animal will manage to get out, and not die in the attic. But you never know with opossums. They are pretty dumb.

How To Get Opossums Out of Walls

Walls are definitely not the favorite nesting sites for opossums, they prefer to live inside attics, and on porches or sheds. However, there are cases where they have been found inside walls, either stuck or just comfortable in there. Baby opossums especially, are liable to fall down from their attic nesting and into walls. They would be mostly helpless and unable to get themselves out of there, unless if there are cables or ropes of any kind to climb. And if they are strong enough to do so.

There are of course, several problems associated with having opossums inside your wall. They are going to make scratchy noises and squeaks as they struggle to get free. Or if an adult female opossum has found a comfortable den in your wall, it will have and keep its babies right in there. The worst scenario in this case is when a critter dies while inside the walls of a house – there’ll be a stench, lots of it, parasites and disease pathogens, a lot of contamination, and sensory invitations to other critters in the neighborhood.

There are simple ways to get opossums out of your wall. If the animal got stuck inside the wall and cannot get out on its own, then making use of traps or repellents will be very useless. The workable solution in this case is to make a cut in the wall and remove the opossum manually. For this, you may require the services of a professional animal controller.

Identifying the exact section of the wall that has the stuck babies is important so the operation does not bring the whole wall down. Listen carefully to the scratching sounds, you may need to put your ears directly on the wall to be sure. You must also be careful while making the cut, not to harm the animal(s) inside the wall.

On the flip side, if the errant opossum is able to enter and exit the wall by itself, then there will be no need to cut out the wall. Set a trap just outside the wall (probably in the attic) along the path of the animal. Bait the trap with apple, banana or any other fruit. Check the trap frequently so you can remove the opossum as soon as it is caught and relocate it.

One-way exclusion doors would also work for mobile opossums in walls. This one-way door will allow the opossums to leave their hideout, but it will be impossible for them to enter through it, hence they have been easily forced out of the wall and will seek alternative accommodation elsewhere. Just make sure that they do not find it on your property again.