Raccoons are one of the most commonly dealt with nuisance animals. They have adapted to living with humans, and are in fact now considered more urban animals than wild animals. City populations are usually about ten times as high as forest populations. Read more About Raccoons. They have learned that garbage cans and dumpsters are excellent sources of food, and that houses are excellent habitat. A mother raccoon will often tear a hole in a roof to access an attic, where they will make quite a mess and a lot of noise. If you have a raccoon in the attic, it's going to make a big mess and leave a lot of droppings. They are strong animals, and once inside an attic, they often tear off insulation paper, rip open ducts, tear insulation off pipes, etc. Here are some photos of: raccoon damage inside an attic. They will search hard for food, and are fond of tipping over trash cans, raiding dumpsters, and stealing pet food. They will often break into a screened-in porch to get pet food. It's common for raccoons to poop in a swimming pool, or eat decorative fish in a pond. They carry a number of parasites and diseases that can affect people or pets. 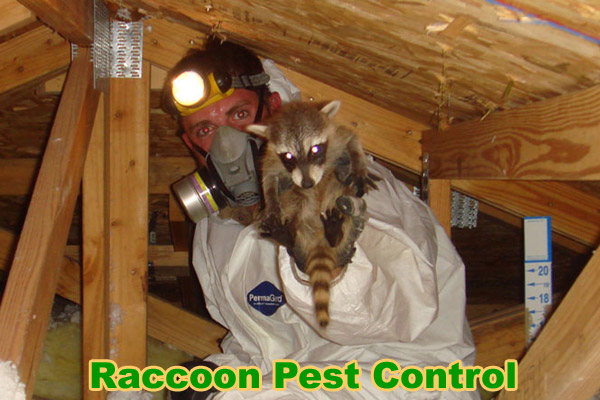 You can see that solving a raccoon problem is not as simple as driving up, spraying some poison, and leaving. It's also not as simple as driving up, setting a trap on the ground, and picking up the critter when it is caught in the trap - far from it. Complete wildlife control is often very complex. With raccoons, there's almost always the presence of babies - if you merely trap the mother raccoon and take her away, the baby raccoons left behind in the attic cause a very big problem. Each wildlife situation is different. There aren't simple fixes. Please read these other raccoon articles I've written to address your specific raccoon problem:
raccoon trapping tips - raccoons in the attic - how to get rid of raccoons - raccoons in the pool - how to trap raccoons - raccoon bait - raccoon poop - raccoon removal - raccoon in chimney - raccoon pest control - raccoon damage - raccoon repellent - raccoon in the house raccoons under the porch

Real Raccoon Situation: Hello David: First off, let me say your website wildlife-removal is extremely informative and well put together. As I have never had a racoon or pest issue in my home, the site was very helpful in what to expect when we thought we may have a raccoon in the attic. I wish I'd gone with your directory recommendation, but instead I used my own internet search. I want to share with you my experience with a Los Angeles raccoon removal company "Joe's Critter Trapping" and why I think you should never consider listing these guys as your referral.

I hired this company 3/10/11 who I was under the impression would humanly trap and release the raccoon I was sure had recently gotten into my attic. I asked about the cost of their service and was told that it was $80 for two cages to be set. Once the guy came out I explained to him why I hired his company and that we were looking to have the raccoon removed, the hold sealed up and the raccoon released unharmed. The guy assured me he was an animal lover too.

The guy agreed and told me to check the traps in the morning and call him as soon as we saw anything in the traps. Well the next night we had caught a racoon and I was afraid it would bite me but when we called the guy said he would have to be out in the morning to pick it up since it was 9pm. The guy didn't show up until 2:30 pm after calling him several times and him telling me he would be there in 30-mins. I was pretty upset since the raccoon had been trashing up on my roof for 18 hours at that point which clearly violated their neglect portion of their contract. I would have pulled it down myself but there were no handles on the cage to stop me from getting bit by the aggravated raccoon.

After he pulled the raccoon down, I asked if they have a set place they release them or did he want me to explain how to get to the mouth of our local canyon about 10 blocks over. He told me that they take them to the shelter and get a receipt. I knew what he meant, but had him explain himself any ways and let him know that I had hired his company because they were going to release them. He explained that LA county code required them to have them put down as they could be disease carriers. I later verified with LA County animal control that they are required to release them within 1 mile of the property or destroy them, that they have a choice. On top of it all he then told me it was triple the quoted price since they were removing the animal. I called to discuss the issue with the manager, Vick at the company and he just told me he would get back to me. After hanging up I received a call from the tech who was very upset with me for the complaint.

Obviously I will never use this company again as they are clearly a non-reputable company that is misrepresenting themselves as a catch and release company and coning customers into hirer service fees. I am sharing with you this story as I believe you may not have experience with this company and shouldn't consider listing them as a referral. Sincerely, Sara

My response: Wow, it's too bad that bad companies are out there. It's sometimes hard to tell who is going to be good or not, but the first key to hiring a good raccoon pest control company is to ask a lot of questions on the phone to find out if the person answering the phone is going to do the work, and if they know what they are doing. Being licensed and insured is important too. Hopefully the information on my websites will give customers enough information to ask companies informed questions about wildlife removal issues.