The English word “raccoon” is an adaptation of a native Powhatan word meaning – animal that scratches with its hands. The raccoon is native to North America and can be found in most of the United States. It can also be found in parts of Canada, Mexico and the northern-most regions of South America. 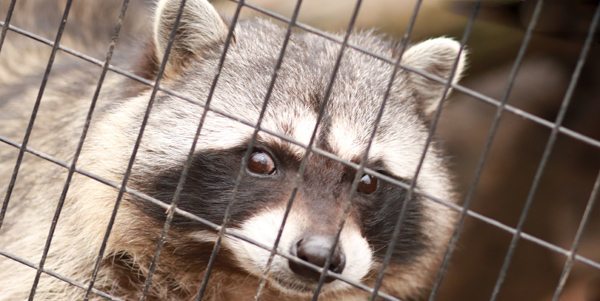 Physical Appearance
An adult raccoon typically weighs between 14 to 23 lbs., and averages 24 to 38 inches in length. The male raccoon (Boar) is slightly larger than the female (Sow), and the babies are called kits.

The raccoon has several distinctive features by which it is easily recognizable:

- A characteristic patch of black fur that masks both of its eyes and is in turn surrounded by white fur. It is believed that the black fur enhances the mammal’s night vision and its nocturnal activities.
- The rest of its body is covered by dense grayish brown fur, which serves to conserve its body temperature. Young raccoons have darker coats than the mature ones.
- The species is also characterized by the presence of alternate light and dark rings on its tail
- Its two hind legs are longer than the front legs, making it look hunched while running.
- It has black paws with 5 toes each; the clawed toes on its front paws are very nimble and can grasp foods and objects quite well

Life Cycle
Raccoon mating season runs from January through March, followed by an incubation period of 2 months and a bit. Then the female gives birth to a litter of between 3 to 6 babies, who begin standing at about 6 weeks old. The mother weans them at 70 days and they soon start to follow her out on hunting trips. Do Raccoons Live Or Travel In Packs?

In these early stages, the mother carries them around by the neck, just like cats carry their young. They thereafter learn to hunt and climb trees. The kits may stay with their mother for up to a year, during which she protects them from potential predators. In the wild, a raccoon has a life expectancy of about 2 to 3 years, but can live up to 20 years in captivity. Read about How Big Do Raccoons Get?

Habitat
The raccoon’s natural habitat is in wooded areas, especially near water. It is however able to do well in cities and suburbs, where it typically makes its den in trees. It is also known for making its den in caves, sewers and even in houses (attics and chimneys).

Behavior
The raccoon is a solitary animal, except for mothers with young. While a raccoon can run at a speed of up to 15 miles an hour, it mostly walks. A good swimmer, it hunts for food both on land and in the water. Most of its activities are carried out at night. The raccoon is a very good climber and can go down a tree backwards or face first. It does not hibernate during winter, but may sleep in its den for weeks at a stretch. It is known to make a variety of vocal sounds including hisses, whistles, screams, growls and snarls. The raccoon has a heightened sense of touch and its very sensitive front paws are even more so underwater.

Food and Diet
The raccoon is an omnivore and mostly eats fruits, nuts, corn, berries, insects, rodents, frogs, eggs and crayfish. In urban areas, it often forages in trash cans and can be seen examining and ‘washing’ its food in water if there is any nearby. The reason for this is to soften the food and look for any foreign object on it.

Go back to the Raccoon Removal page. Or, you can read about how to get raccoons out of the attic since that is where they commonly live, or you can read my general how to get rid of raccoons guide. I do not advocate killing these animals. Read why on my how to kill a raccoon page. Often the best method is trapping and removal read about raccoon trapping tips here. Many people ask about what bait to use for raccoons if catching them in a cage. Or better yet, prevention is often the best approach. I have listed several techniques for how to keep raccoons away. If you don't know for sure that it is a raccoon, but you have fecal evidence, you might want to look at my raccoon poop photos. And remember, there is no effective raccoon repellent. So if you have a problem with these animals, you will have to do the work necessary or hire a professional.